Hands off my cameraman - Lukau 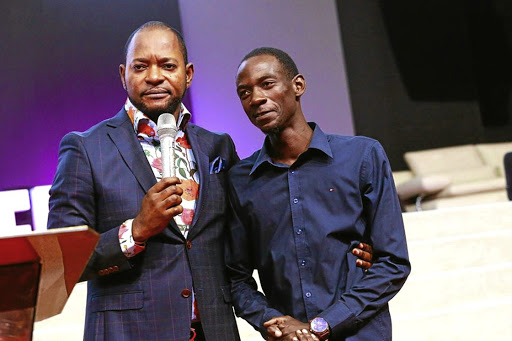 Alleluia Ministries International's pastor Alph Lukau on Friday night responded to the backlash he received over his "resurrection miracle" during a service in Sandton.

Thousands of congregants shouted worship praises when Lukau, dressed in a blue tailored suit, made his way to the podium.

Sunday World attended the service, in which thousands of congregants were bused in for Lukau's briefing on the resurrection miracle which hogged headlines last week.

The congregants were wearing T-shirts with the face of their leader and holding placards saying "Hands off our Moses", "We love you our pastor Lukau" and "I am a proud daughter of Alph Lukau".

During his Sunday resurrection service, Lukau forthrightly declared that the body in the coffin was of man who had died on Friday, last Friday he told his congregation the body was in a "catatonic" state (stupor) when it arrived in church.

"All things happening is not strange to our church but also not strange to the word of God," he said. Lukau called the church's cameraman, Anele Watson, to the stage to parade him to refute rumours that he was the "resurrected man" in the coffin video that went viral.

The congregation was told that Watson grew up in the church and hails from Pretoria. According to the church, after some media identified him as Brighton Moyo, Watson felt unsafe due to random people approaching him while boarding a train to work.

"His father is one of the executive bishops in this ministry." he said.

Lukau said he instructed his legal team to sort out the matter. "Not that I want to put up a fight but I want to claim the simplest dignity [for Anele].

"Now he can't go to the Gautrain, he has to be indoors. For him to come to church he has to get an escort," he added.

"I couldn't stop coming because in this church we experience everything. We see everything that was happening in the Bible come alive.

"We see God here," said Michelle. When asked if they attended the "resurrection" service, the sisters initially denied it. They later confessed they were in church when Lukau performed the "miracle". 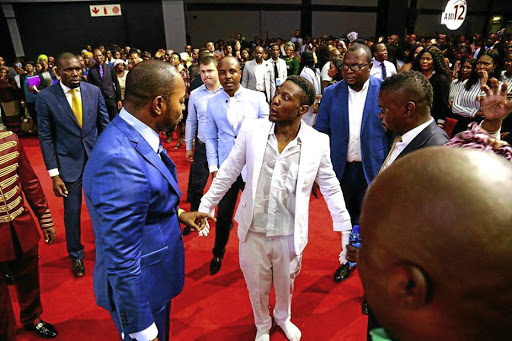 Pastor Lukau with the 'resurrected' man.

"I think people misunderstood the whole thing, that is why our dad (Lukau) was trying to explain this on radio.

"I heard that when the person got here, already he was moving," said Michelle. They said Lukau had prepared the church for scrutiny and ridicule.

"Our dad has prepared us for this. He taught us that people will always ridicule men of God," said Nomvula.

Sunday World was politely escorted out of the church when ushers noticed that journalists were on the premises.

Church Spokesperson Busi Gaca said the media is normally allowed in but because of the past week's scrutiny, the church was hypersensitive.