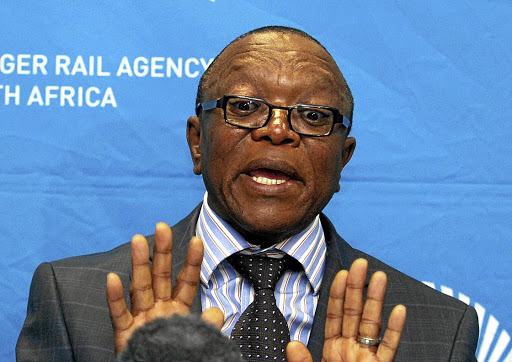 The chairperson of Transnet board Dr Popo Molefe has filed a R1m lawsuit against renowned author and businessman Muzi Gabaswane Kuzwayo for defamatory remarks he allegedly made on Talk Radio 702 last year.

The lawsuit was filed at the South Gauteng High Court on Wednesday, February 20, and Kuzwayo was given 10 days, upon receipt of the summons, to file a notice of intention to defend the suit in the same court.

In the court papers seen by Sunday World, Molefe said, on August 15 last year, the board issued notices of intention to suspend then Transnet group CEO Siyabonga Gama following recommendations made by Mncedisi Ndlovu and Sedumedi Attorneys, who were appointed by the erstwhile Transnet board to investigate allegations of impropriety during the procurement of the 1064 locomotives tender.

He said Gama was given until August 28, to make representations on why he should not be suspended.

The Transnet board is taking legal action against former CEO Brian Molefe and CFO Anoj Singh.
News
3 years ago

Molefe said Gama elected to make representations and while the board was in the process of considering them, further evidence of misconducts against him surfaced.

He further said that on September 26 last year, the board served Gama with notices to make representations why his appointment should not be terminated.

"On Friday September 28, 2018, during a radio show titled Afternoon Drive with Joanne Joseph on Radio 702, the circumstances relating to Mr Gama's notice were discussed.

"During the show the defendant called in and wrongfully, maliciously and with the intention to injure the reputation of the plaintiff, stated that the plaintiff was vindictively fuelling a smear campaign to discredit Mr Gama's reputation," Molefe stated.

He further noted in his papers that Kuzwayo accused him of being involved "in a haste to dismiss Mr Gama for personal reasons, to smash and grab Transnet's profit for his own personal benefit".

Molefe said Kuzwayo's utterances were understood to mean he was a "thief" and "in breach of his fiduciary duties".

Molefe confirmed that he has filed a law suit against Kuzwayo. "He insulted and defamed me on matters that were not factual."

"I will expose Mr Popo Molefe in a court of law on how he character assassinated certain individuals, charged them, tried them in the media but then fired them for something totally unrelated," said Kuzwayo.