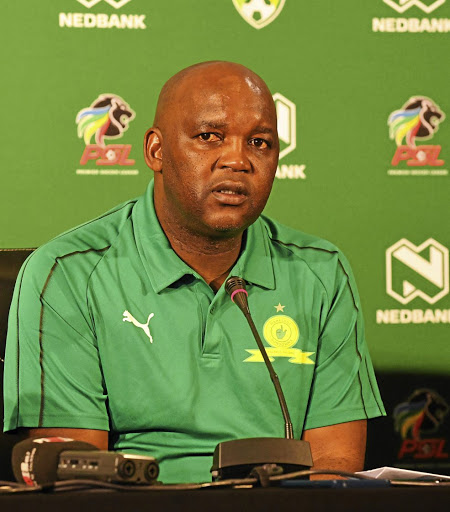 Mamelodi Sundowns coach Pitso Mosimane and team manager Peter Ndlovu have been allegedly used in a SIM card cloning scam that resulted in their forward Jose Ali Meza being robbed of his clothes and money.

And in a shocking move, the club's independent investigations revealed that one of the team's players was linked to the device that was being used to commit the crimes.

Sundowns spokesperson Thulani Thuswa confirmed that Meza and Ndlovu opened cases of fraud after the incident.

"It's now a police matter and hence we choose not to comment to allow the police to do their investigations," he said.

Speaking to Sunday World, a club official who didn't want to be named because he was not authorised to speak to the media, said Meza allegedly received a WhatsApp message from Mosimane's and Ndlovu's cloned SIM cards when he was in Venezuela last month asking him why he was not in the training camp with the team in Nigeria.

"Meza replied and said 'Coach, I thought you knew that I am in Venezuela'," said the club official.

The official alleged that the impersonator warned Meza that club president Patrice Motsepe would fire him if he found out about his alleged AWOL.

The fraudster then asked Meza to deposit R10,000 into a bank account number he sent to him to stay out of trouble.

The con artist also told Meza to ask his partner, who was in SA at the time, to pack his clothes and get them ready for people to collect on his behalf and send to Nigeria.

Warning! Don’t return that international call‚ lest you get caught in the latest phone scam

To be a step ahead of the latest scam‚ don’t return a missed call from an international number you do not recognise.
News
3 years ago

"Apparently, out of fear to lose his job, Meza deposited the money into the account he was given. He also told his partner to pack the clothes for some people to collect on his behalf and send them to the camp. The people went to Meza's residence and took the bags full of clothes and disappeared," said the official.

Ndlovu was peeved by the usage of his name in the scam and opened a case of fraud with the police but Mosimane had not yet done so.

The official said although police were investigating, the club conducted its own independent investigation as they viewed the matter in a serious light.

"Apparently the investigators were able to detect that the device used to commit the crimes was once used by one of the club's players. The user was located in the Free State province," said the official.

"The coach understands that we live in a world where criminals hack into people's phones for criminal intentions.

"He has other priorities and that is why even the so-called open letter by Toni Silva did not worry him much. He is a professional and he expects some of these negative things to happen in the line of his work.

"It is difficult to take responsibility for something that you don't have control over, but he hopes that those responsible will be brought to book," he said.

Police spokesperson Mavela Masondo confirmed that a case of fraud was opened at Edenvale police station but said no arrests have been made yet. Investigations are continuing.