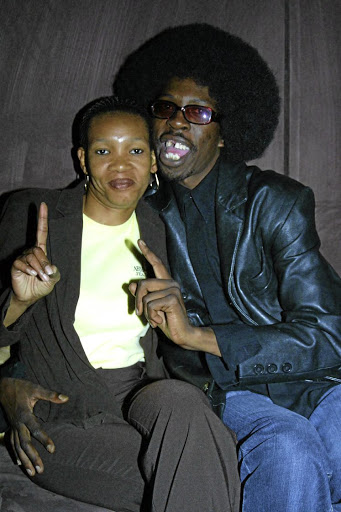 Pitch Black Afro and his wife Catherine Modisane, who died in a B&B in Yeoville at the end of last year.
Image: MOHAU MOFOKENG

The musician, real name Thulani Ngcobo, then allegedly concealed the evidence from the police by "putting a sanitary pad into her private parts" and claimed that the blood found at the murder scene came from her menstruation.

The musician also allegedly wiped the blood from the scene with a towel which appeared to have been hidden in the room when police and paramedics arrived.

This is the version the state intends to present against Pitch Black, according to a well-placed source.

Sunday World understands that the state pathologist refuted the musicians's version by finding that Modisane was not on her periods at the time of her untimely death.

These explosive details apparently form part of the murder case the state has preferred against the muso for allegedly killing Modisane.

A highly placed source, who has seen the docket, said Ngcobo and Modisane were drinking alcohol on December 30 at their friend Herbet Moajela's place in Yeoville, Joburg.

The singer left and went to the B&B the couple had booked into and was later followed by Modisane.

Modisane left the B&B and apparently went back to rejoin Moajela and friends to have more fun. She returned in the wee hours when the musician was sleeping.

Witnesses apparently told police that a fierce argument erupted between the two when Ngcobo accused Modisane of "disrespecting him", "humiliating him" and "damaging his music career".

A mole claimed a security guard who works at the B&B said in an affidavit that he heard the commotion and noise in the couple's room which subsided at 2am.

The source said the state will argue that Modisane died around 2am and was killed by Ngcobo.

"But the artist only alerted the establishment and the emergency service at 10am [about Modisane's death].

"It is believed the delay was because of an attempt to conceal evidence."

When the emergency personnel arrived, they found Modisane had bruises around her eye and blood was oozing from her ear and mouth.

"It also says the J88 medical report shows that Pitch Black Afro sustained injuries that were consistent with a person who was involved in a scuffle."

The source also said Ngcobo, in his statement, refuted allegations that he killed his wife.

The Ntofontofo hitmaker said he received an invite to perform at a show in Port Elizabeth on December 29 last year and another in Kimberley on December 31 and that, to prepare himself for the show, he booked a hotel room in Yeoville.

He said on December 30 he and Modisane left for a nearby flat to meet Moajela and his wife for drinks.

"He said they arrived there during the day and had a couple of drinks until later around 9pm when he decided to leave because he needed to rest for the show that was to take place on the 31st in Kimberley."

The star's statement says although he initially went back to Moajela's flat to collect his wife, she rushed back to the party to continue the fun with their friends.

According to the musician, Modisane returned to the hotel in the wee hours of the morning. Although they had an argument about her behaviour, he says he quickly dropped the topic because she was drunk.

The source said Ngcobo claimed Modisane was coughing and vomiting blood and he went to call for help and the paramedics declared her dead upon arrival.

NPA spokesperson Phindi Mjonondwane said they added a charge of defeating the ends of justice to the charge sheet.

"The state confirms that Pitch Black Afro tried to conceal evidence, as per details provided by IO [investigating officer] in the state's responding affidavit to the accused's affidavit deposed in support of his bail application.

"However, the state will not be drawn into commenting further about issues that the trial court is yet to make a determination on."