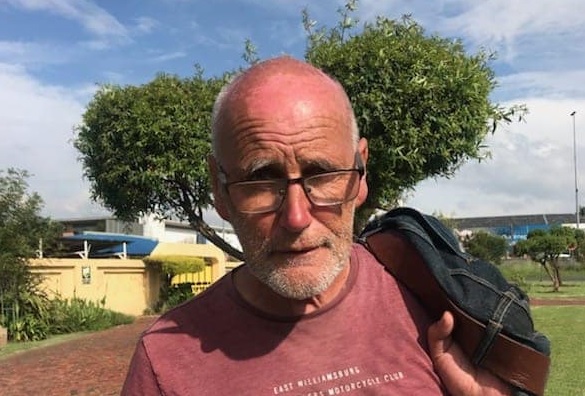 Irishman Stanley Currie will be able to return home from South Africa soon, thanks to the generosity of strangers who helped track him down in Gauteng. They have donated money to fund his return.
Image: Richard Currie via Facebook

Relatives of the Irishman who headed to South Africa to meet a person he was chatting to online for two years, only to wander the streets of Johannesburg, have started a crowdfunding page to try to get him home.

“We’re raising £1,000 to help get Stanley Currie home from South Africa after he was mugged of all his belongings, passport and money,” Currie’s crowdfunding page on justgiving.com read.

“We need to put Stanley up in a hotel until his emergency passport can be got and we get him home as soon as possible (sic).

“He has been walking the streets of South Africa for a week with no food or water and is currently receiving medical care,” the page read.

An Irishman‚ 66‚ who was reported missing after flying to SA last week to meet a woman he had been chatting to online for two years‚ was found on ...
News
3 years ago

The 66-year-old was reported missing after no one heard from him following his departure from his Dublin home on December 28 2018, when he said he was headed for South Africa.

His brother, Robert, took to social media to locate him.

“He hadn’t booked any accommodation over there [and] was carrying a large amount of cash. He suffers from depression and has got heart health problems,” Robert said.

“This ‘person’ who he was going to meet... no one from the family have any idea who ‘she’ is and we are obviously concerned that it is a scam.”

On January 7, his family announced that he had been located in Edenvale, east of Johannesburg, in Gauteng, a suburb approximately 17km from the OR Tambo International Airport.

The family of a 66-year-old Irishman who is believed to have flown to South Africa last week to meet a woman he had been chatting to online for two ...
News
3 years ago

This was after several tip-offs that he had been seen in the area.

Some of those who came forward claiming to have seen him said they had identified him as the missing man by the tattoos on his arm.

The SA Community Crime Watch group, which assisted in the search, said he had the names of his family members tattooed on his forearm.

Spokesperson Steven King said that two women had found a sunburnt Currie lying under a tree on a pavement in Edenvale.

“When they found him, he was disorientated. He said he got lost and could not find the way back to the place where he was staying,” King said.

He had his cellphone and a pair of jeans with him.

It was not immediately clear whether he met the woman he travelled to South Africa to see during his time in the country.

Irish citizen Stanley Currie, 66, was found 15km from OR Tambo airport in Johannesburg. He is currently receiving medical attention and a crowdfunding campaign has been set up to help get the man home to Dublin.