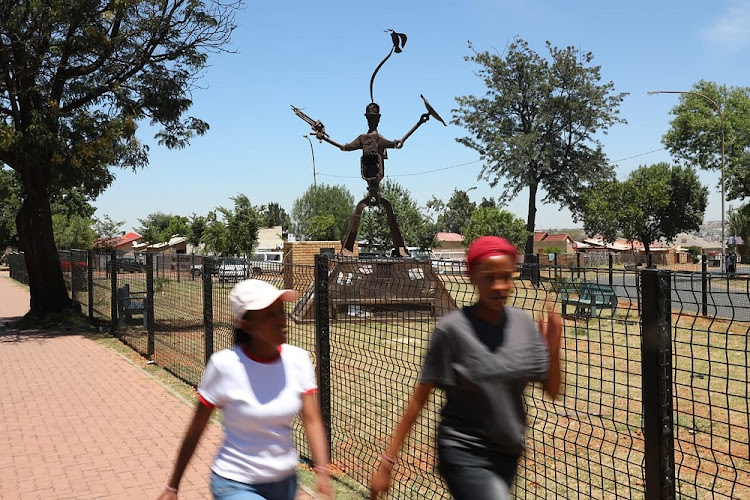 A new fence surrounds the sculpture by professor Pitika Ntuli in honour of the Silverton Three in Diepkloof.
Image: Thulani Mbele © Sowetan

The Silverton Three monument in Soweto has been fenced off to protect it from being vandalised even though the good Samaritan who preserved it is not known.

This after residents, including former award-winning photographer Mike Mzileni, raised concerns about the monument being a billboard for salacious posters by bogus doctors.

Sunday World reported earlier this year how the site, unveiled in 2003 to honour three fallen Umkhonto weSizwe heroes of the Struggle, was desecrated.

The Sunday World team also found unsavoury adverts of penis enlargements services pasted on the base of the monument designed by iconic artist, sculptor and former freedom fighter professor Pitika Ntuli, when we visited the site opposite Diepkloof Hall in August.

This week when we revisited the site, we found it was fenced off following the publication of our article. Mzileni said he was happy the monument was now safe from vandals but said he was still concerned that many members of the community did not know about its importance to our Struggle.

Mzileni added he met with the chief of South African National Defence Force (SANDF), General Solly Shoke after the article was released, who had promised to fence off the monument.

A hawker trading from the site, Nyaniso Tintile, said he was pleased with the fence even though that meant residents would be unable to chill out next to it.

SANDF spokesperson Mafi Mogobozi said they were not involved in the fencing.

City of Joburg spokesperson Nthatisi Modingoane said the department of arts & culture had assigned a task team to ensure that the park was neat. “The concerns about the offensive flyers attached to the Silverton monument have been noted.” Ntuli said he appreciated the attention South Africans gave the Silverton Three monument by constantly raising concerns around its maintenance.

“I was also notified about the missing plaque and I am working on that,” he said.