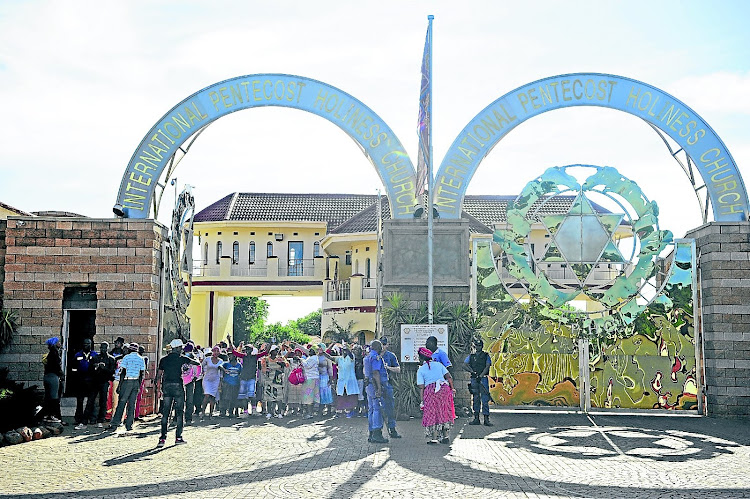 FILE IMAGE : Violence has broken out between rival factions of the IPHC over succession after leader Glayton Modise died.
Image: Thulani Mbele

The violence fueled by the divisions within the International Pentecost Holiness Church (IPHC) continue unabated with at least six cases opened throughout the country in the past few weeks.

In the latest dramatic attack between two factions in Cape Town, some congregants at IPHC Table View had private security dogs tearing into them as battles ensued at the church’s branch in the Mother City.

The attacks followed those that took place at the church’s headquarters Silo, in the south of Joburg, last month where gunfire was exchanged between supporters of the two factions.

Another shooting was reported at the church’s branch in Mahwelereng, Limpopo, and Mabopane in Tshwane, two weeks ago.

A branch of the church in Tsakaka, Brakpan on the East Rand, also recorded violence last month.

“Kindly be advised that mentioned cases – possession of dangerous weapons and assault – have been registered,” he said.

Gauteng Hawks spokesperson Ndivhuwo Mulamu released a statement last week in which she said 17 members of the church were arrested and released on R2000 bail each.

Church service goes ahead at IPHC amid tight security

It was business as usual at the International Pentecostal Holiness Church in Zuurbekom‚ west of Johannesburg‚ as congregants attended a service under ...
News
3 years ago

Mulamu also stated that they were still on the lookout for two other suspects.

The statement read: “The fifteen males and two females aged between 23 and 62 were rounded during an early morning raid in and around Mabopane, just outside Pretoria, for alleged murder, attempted murder and malicious damage to property.

“The matter was referred to the Hawks in May this year and with the assistance of crime intelligence, 17 out of the 19 suspects were arrested. Two other suspects are still being sought and will be arrested soon,” read the statement.

It also stated that the suspects went into the Mabopane IPHC branch and asked to discuss the court battles on who should succeed their late comforter.

It explains that a fight broke out and at least 11 members sustained serious injuries and were transported to various nearby hospitals while four cars were damaged at the scene.

The problems at the church, South Africa’s second biggest with at least 3.5 million throughout southern Africa, began in February two years ago when its leader Glayton Modise died.

Modise, who was known as The Comforter to his congregants, had two wives at the time of his death. They have also been embroiled in a legal tussle over his estate.

His first wife, Mirriam, has two sons, the eldest Tshepiso and the youngest Leonard.

According to the church’s traditional practice, Tshepiso was supposed to inherit the leadership position from his father but a faction within the church had been opposing this move both legally and through violence.

Although Leonard did not make it to the family meeting, he was represented by his lawyer, Lekgau said.

He later released a statement on Facebook following the meeting.

“Modise family distances itself from all activities of the so-called BGB movement. It condemns all the violence and guns at church,” read the statement.

BGB stands for Bring God Back (BGB), which is a splinter church allegedly started by Leonard.

Church sources claim that the attacks have also been escalated following a recent decision made by the church council that Michael Sandlana, Modise’s son out of wedlock, be considered as the possible spiritual leader of the church.

A church member from Mabopane, north of Pretoria, told Sunday World that they were held hostage inside the church premises on October 31.

The man, who did not want to be named, said a day after that, Silo attacks took place where several people were injured and scores of cars damaged.

“People now come to church not knowing if they would return home alive,” he said.