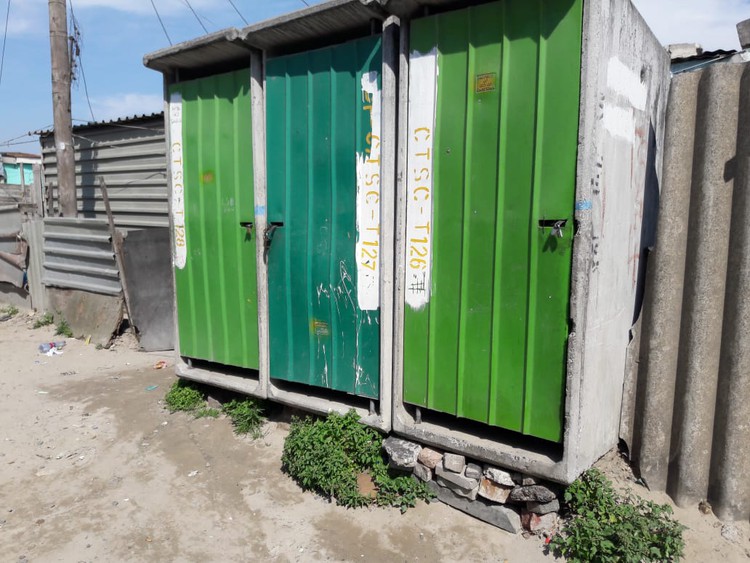 Taiwan informal settlement resident Nolundi Philiso broke her leg going into the toilet on the right. Since then residents have filled the hole with stones.
Image: Sibusiso Mdlankomo

Just over a month after a resident of Taiwan informal settlement was trapped inside a communal flush toilet when it toppled over‚ another resident broke her leg while trying to use one of the toilets.

Residents of Taiwan in Khayelitsha‚ Cape Town‚ say most of the toilets there are old and no longer stable.

Nolundi Philiso says when she entered the toilet last week she slipped and her leg slid into a hole between the ground and the toilet.

“I was in so much pain and could not stand or walk. I was helped by other residents and taken home‚” said Philiso.

At the clinic she was told her leg was broken. She is now living with her aunt until her leg is operated on.

"The doctor says they will have to put in screws in my leg because it is damaged‚" she said.

"I have been living in Taiwan for about a year and the toilets have always been like that‚ loose. But we have no other alternative‚ we have to use them‚" said Philiso.

The financing of water and sanitation infrastructure still comes predominantly from public sources.
Opinion
3 years ago

GroundUp reported in September how Vuyiswa Nofuma was trapped in a toilet‚ also in Taiwan informal settlement‚ when it fell over with her inside.

Community leader Thandi Jolingana said the toilets had still not been fixed by the city of Cape Town though problems had been reported "countless times". Philiso‚ on the other hand‚ told GroundUp that she had not reported her incident to the city.

City media manager Luthando Tyhalibongo said representatives from the city’s informal settlements department had met the ward councillor and community leaders on October 30 about the toilets.

"It was agreed that a site visit with the maintenance teams should be undertaken. This is scheduled for November 15 (Thursday)‚ after which the city can respond in more detail."

- This article was first published by GroundUp