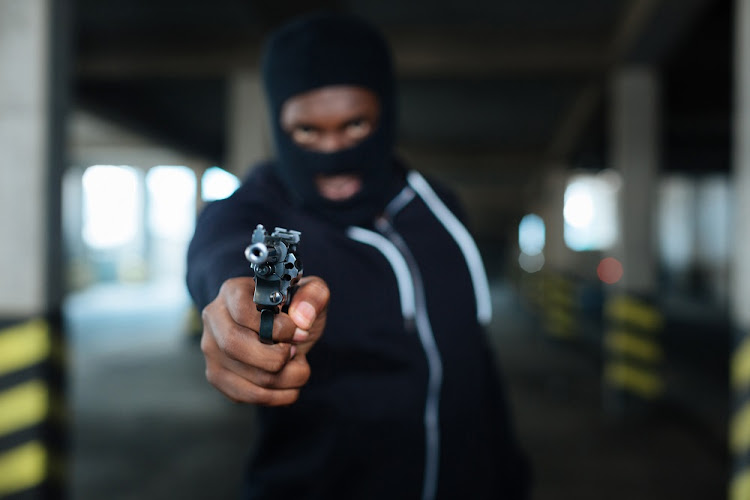 54-year-old Shai was gunned down in a parking lot outside the Commando shopping centre in the Free State.
Image: 123RF/ Dmytro Zinkevych

A family's plan for birthday cake and celebrations turned into a nightmare after a Welkom man was shot and killed at the weekend.

The Mophapi family’s world was turned upside down after 54-year-old Shai was gunned down in a parking lot outside the Commando shopping centre in the Free State town on Saturday evening.

It was Shai's wife's birthday on that fateful day‚ and he had driven her to the shops for provisions‚ this publication has been told.

Eyewitness Belinda* on Tuesday relived the moment when five gunshots rang out‚ leaving a lifeless body on the ground.

Belinda said she and her husband arrived at the shopping centre to buy something to eat. They parked a few metres from Mophapi’s blue Volkswagen Polo and made their way to one of the shops.

"Before we entered the shop‚ we heard the first gunshot. My husband and I turned around and saw the Polo with two men‚ one with a white shirt and one with a red shirt‚ standing by the car‚" she said.

She noticed a shiny object in the hand of the man in the red shirt.

"When the second shot went off‚ I was thinking to myself 'are they pranking this guy with a fake gun or what?'.

"It was when they took the owner out of the car and threw him to the ground that I realised he had been shot."

The two men got into the car and sped off‚ driving over one of Mophapi’s legs.

A manhunt is under way for two men - one of whom walks with a limp - who were filmed on CCTV killing a man inside his car at a shopping centre ...
News
3 years ago

Panicked and shocked‚ she and her husband froze‚ with no clue where to run or hide.

"At that moment‚ the world felt so small."

Mophapi’s wife was paying for her purchases at one of the cashiers at the time‚ said Belinda.

When she saw what had happened‚ she shouted: "That’s my car!"

Then someone inside the shop told her that her husband had been shot.

When she saw him on the ground‚ she started shouting and screaming hysterically‚ said Belinda.

The distraught woman was comforted by people in the supermarket while her husband’s body was covered with a blue blanket.

Belinda said: "It felt so unreal‚ these things you only see in movies. This is the first time we saw someone getting shot right in front of us.

"We were on our way to buy food‚ but afterwards we were not hungry.

Police spokesperson Capt Stephen Thakeng said no arrests had been made.

"The investigating team is working around the clock as the manhunt continues‚" Thakeng said.

On Monday‚ Sibanye-Stillwater confirmed that Mophapi had been a chief safety officer at their Beatrix mining operations near the towns of Welkom and Virginia.

* Belinda is a pseudonym to protect the identity of the eyewitness