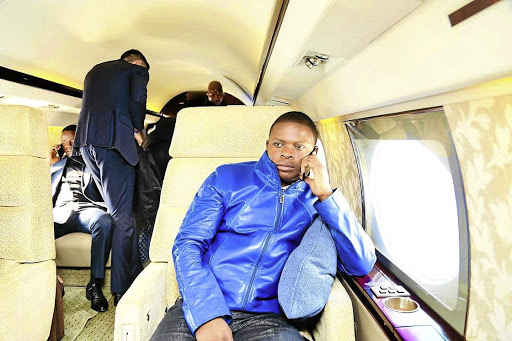 Prophet Shepherd Bushiri in his private jet. Bushiri has reportedly opened a case of extortion against cops who wanted R10m from him to make his allegedly concocted cases disappear.

Bushiri opened a case of extortion with the Independent Police Investigative Directorate (Ipid) in February against crime intelligence unit cops and two men purported to be from Ramaphosa's former retinue.

He also reported the shenanigans to the crime intelligence inspector-general Setlhomamaru Dintwe.

According to a source, the alleged suspects, who include a top Gauteng cop, known to Sunday World, demanded R10m from Bushiri in exchange for squashing all alleged criminal cases against him.

When Bushiri refused to co-operate and demanded his day in court, they reduced the amount to R5m. The amount was further decreased to R1m when the charismatic Bible-puncher still wouldn't budge.

Bushiri alleged that the cops harassed him and flagged his passport and even flew to his Pretoria church in a helicopter and threatened to arrest him on the pulpit before his millions of congregants.

Pastor Mboro on his R1m 'gift' from Bushiri: I haven't received it yet

Pastor Mboro has rubbished rumours that Pastor Bushiri gave him R1-million as a gift for his birthday.
Lifestyle
3 years ago

Ipid spokesperson Moses Dlamini confirmed that Bushiri had lodged an extortion case with them and investigations were under way.

"I can confirm that a complaint has been lodged with our Gauteng provincial office. An investigation will be conducted by Ipid," he said in a written reply.

Dintwe's legal adviser advocate Jay Govender confirmed Bushiri had filed an extortion complaint with them and it was being investigated.

"We have received a complaint from Dr Prophet Bushiri. The matter is still under investigation hence we are unable to comment at this stage," she said in a written reply.

Bushiri, who on Monday donated R1m to prophet Paseka "Mboro" Motsoeneng for the charity role he played in Gauteng, couldn't be reached for comment at the time of going to press.

But his lawyer Ntsako Baloyi confirmed that the clergyman had filed extortion complaints with the two law enforcement agencies against the suspects.

"The ordeal started during February 2018 in which one known as captain [name withheld] personally went to the prophet in the company of a few police officers and other individuals who introduced themselves as attorneys and advisers to the then deputy president of South Africa.

"The first group of cops wanted R10m from him to make his 'cases' disappear," he said in written statement.

Baloyi said the amount was first reduced from R10m to R5m and later R1m, when Bushiri refused to budge.

Baloyi claimed that when the pastor refused to fork out the R1m ransom, he was subjected to a series of harassments and abuses.

"Captain [name withheld] called the prophet the day before and threatened to deploy a police helicopter to embarrass and arrest the prophet during church service.

"Of course, the prophet refused to pay and the helicopter hovered around above the church, flying low and causing a lot of noise, almost disrupting the church service and everyone was curious about the mission of the helicopter.

"The following day police came to the church and remained on the premises until the end of the service. It is believed they were there to intimidate the prophet and were demanding that he pays the millions to [the police captain]. To this effect we have pictures of police vehicles on our file."

Baloyi said the alleged cases against Bushiri were fabricated in order to extort money from him and to soil his good name and reputation.

'10 vehicles not the proceeds of crime'.
News
3 years ago

Mokhukhu singer says he sees God in the prophet.
News
4 years ago
Next Article