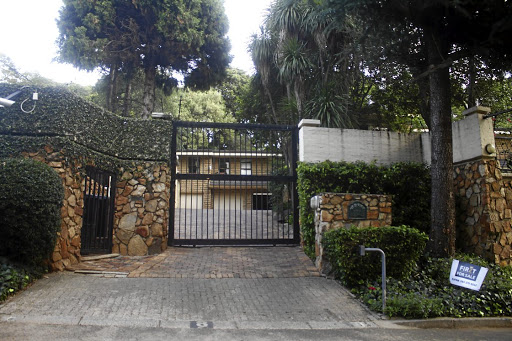 Zephrona Sizani Dubazana's house in Forest Town is up for sale. Former president Jacob Zuma's family is being evicted from the property.
Image: Kabelo Mokoena

The honeymoon of the relationship between former President Jacob Zuma and his benefactor of many years Zephrona Sizani Dubazana is over.

This after Dubazana approached the South Gauteng High Court this week to gain access to the controversial Joburg house that Zuma lived in when he was fired by former president Thabo Mbeki as deputy president in 2005.

It was in the same house that Zuma was alleged to have raped a woman in November of that year. Fezekile Ntsukela Kuzwayo, known as Khwezi during the rape trial, died in 2016. Zuma was acquitted of the rape charge in 2006, a year before he became ANC president.

The house appears to have been used primarily by Zuma's children with his late wife Kate Mantsho, Phumzile and Vusi. Vusi died this year.

A fight between Dubazana and Absa could soon see the Zuma children evicted from the house.

Dubazana's court papers have also laid bare the truth behind the relationship between her and Zuma and the arrangements they entered into for him to use the palatial house.

According to her documents, the businesswoman and ANC MP has been renting out the Forest Town home to the Zuma family.

In a shock revelation, she claimed her house was repossessed by Absa after judgment to do so was given in March. This, she said, was as a result of the Zuma family's failure to keep up with their monthly rental payments.

She said in court papers, she had agreed with the Zumas to deposit their rental directly into her bond account.

Dubazana is now seeking relief to sell the house herself to avoid financial losses after Absa secured a court judgment to attach and sell it off at auction.

Khulubuse failed to raise money to buy.
News
3 years ago

The papers show that the former first family, through Zuma's nephew Khulubuse represented by Zuma's lawyer Michael Hulley, had entered into an agreement to buy the property in 2009 for R7.5m but failed to secure a bond with any of the big banks despite signing an agreement to take immediate occupation.

The agreement, dated September 14 2009 and attached to the court papers, was allegedly signed by Khulubuse using a company called Cyndara 92 (Pty) Ltd, which was yet to be established.

At the time, Zuma had lived in the house for four years under a rental agreement entered into by Khulubuse using his trust account with the house owners, Hola Recruitment and Selection Services, a company wholly owned by Dubazana.

After learning of the bank's decision to attach the property due to arrears and the owner's decision to sell the property to avoid it being auctioned off, Zuma's daughter, Phumzile, made a reduced offer of R3.8m to buy the house. According to her signed offer to purchase, she lives in the property.

The documents show Phumzile made the offer to property agents FIRZT through a bond loan of R3.4m, which was expected to be secured before November 30 2018.

But her offer was rejected by Dubazana who advised her about an earlier agreement of R7.5m which fell through as Khulubuse failed to raise the money.

Dubazana and her company are also seeking an order forcing the Zuma family and Khulubuse, who are considered to be the occupiers of the property, to give her and her estate agent access to the house to allow the photographer to take pictures so that they can market and sell the house.

Dubazana also prays to the court that potential buyers be allowed to enter the property for viewing on Sundays.

This was because the occupiers of the house and Khulubuse had previously refused her and an estate agent access to the property.

Jacob Zuma's lawyers have dismissed the DA and the EFF's bid to force him to pay back millions of rand in legal costs.
News
3 years ago

"The property was purchased on or about 22 June in 2005 and a bond in the amount of R3.6m was registered in favour of Absa bank. On or about September 13 2009 and in Johannesburg, a written agreement of sale . was entered into and signed . in Durban on or about 14 September 2009 in terms of which the 1st respondent [Khulubuse] purchased the property for the sun of R7.5m. The sale was not completed because the 1st respondent failed to obtain a loan from a bank as required in terms ... of the agreement of sale and sale was cancelled.

"However, I entered into an oral agreement . in terms of which they would reside in the property and would be responsible for the monthly payments to Absa bank; and the monthly accounts of the city of Johannesburg municipality in respect of rates and taxes, lights and water and any other municipal charges.

Dubazana said she later discovered that Khulubuse and his family failed to pay for the bond as she was notified by the bank of arrears on her account.

She said the bank then attached the property.

Upon learning about the bank's intentions, Dubazana opted to sell the property herself, so she instructed her lawyers to write to Khulubuse and the Zuma family to inform them about her decision.

She said after speaking to Khulubuse and telling him about the bank's decision, he asked her for a week and promised to come back to her.

According to letters of demands exchanged between the two parties and annexed to the application, the house was rescued at the last minute several times by Hulley after Khulubuse and the first family had failed to pay.

"The property was attached and was due to be sold on several occasions but each time, when I reported the pending sale to Mr Hulley, the sale was cancelled due to last minute payments by Mr Hulley."

Dubazana's lawyer Brian Clayton also indicated that Khulubuse, Hulley and Zuma's family had ignored several letters sent to them asking for permission to access the property to conduct valuations to determine its value.

"My attorney wrote to the respondents and on one occasion the agent was permitted to view the property to get an overall view and assessment of the property and a value of R6.5m was made.

"However since the first permission the respondents have failed to respond to letters from my attorney, and visits by the agent . have not been given access necessary to take photos and to bring the first of the potential buyers. "

Dubazana said two letters in September 2018 were hand delivered to security staff who guard the house on a 24-hour basis, but still no response was received.