A race in bunker gear for fallen heroes 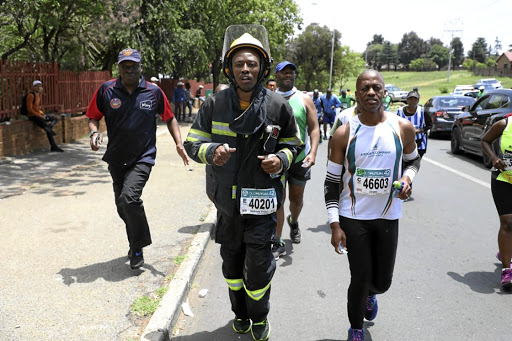 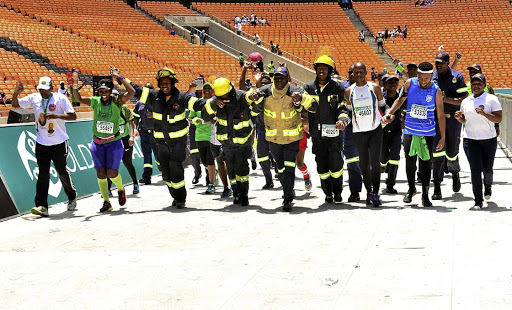 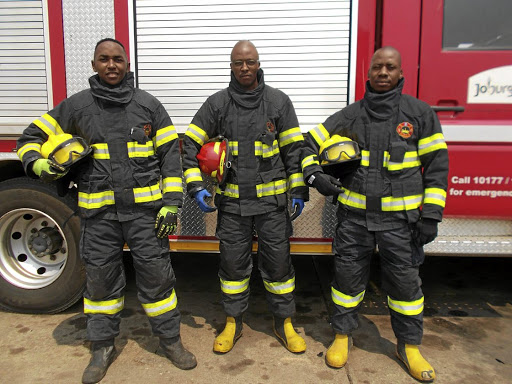 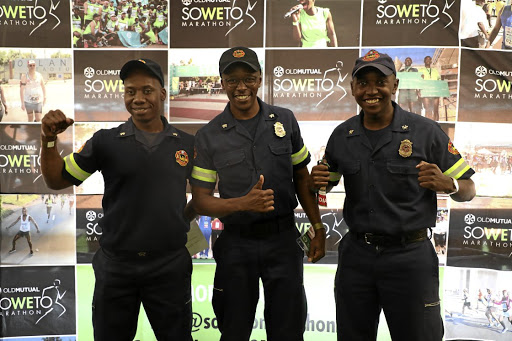 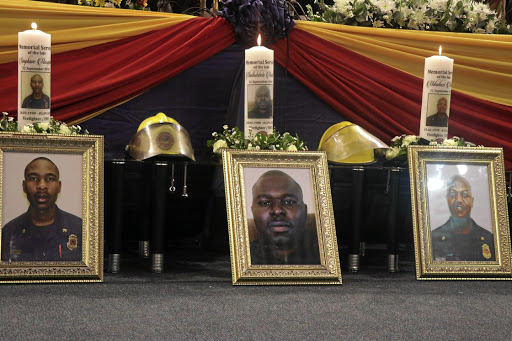 Entry and qualification rules in the athletics handbook were slightly bent to allow three Joburg fire-fighting heroes to fulfil their wish to run their maiden race - last Sunday's Old Mutual Soweto Marathon - in honour of their departed colleagues.

With only sheer determination and guts, the trio entered the race four months after entries were closed.

As first-time runners of the 42.2km marathon, they were issued with temporary licences two days before the race.

Nhlakanipho Khoza, Siphiwe Tshabalala, and Mzolo Nkosi were kitted out in full bunker gear, each weighing 18kg, to run with other seasoned marathoners while honouring the fallen heroes.

Khoza, 23, from Zondi, Tshabalala, 24, from Mofolo, both in Soweto, and Nkosi, 31, from Fleurhof on the West Rand, ran the race in honour of their colleagues Simphiwe Moropane, 28, Khathutshelo Muedi, 37, and Mduduzi Ndlovu, 40, who perished on duty while fighting an inferno that gutted the Lisbon Bank building in the Joburg CBD in September.

Eight other laddermen were injured during the blaze.

"We would like to thank the organisers, particularly Caroline Malan [one of the organising committee members] for making our dream come true.

"We were not doing it for the sake of publicity, we were not even looking for donations," said Khoza.

"After Sunday we drove to Durban to relax on the beach. On Wednesday we went to TUT [Tshwane University of Technology] to check on our marks and pick up the timetables for our exams as we are all studying for a national diploma in fire technology.

"We've even forgotten that we ran the race for the first time and finished it. When the going was tough for one of our members, we waited for them to recover, picked them up and continued running.

"As first-timers we are ecstatic with our 6hr, 22min, 12sec finishing time. We just wanted to raise awareness about what fire fighting involves. Our motto in this job is that we 'enter together, come out together' from a burning building, that's the very reason we ran as a team," said Khoza.

He said, as paramedics, they easily dealt with dehydration along the way.

"We were losing body fluids because of the heavy bunker gear we were wearing."

Said Tshabalala: "It was a difficult race but we were determined to finish it. We would like to thank all the people who lined the streets to cheer us on.

"That suit is heavy, it has three thermo layers inside. But the heat we experienced during the race is nothing compared to what our brothers went through when they died."

Tshababala sustained skin burns during the race because of the intense heat.

"It was a challenging race, especially the up and down hills. Our bunker gear uniform was the greatest challenge. It restricted movement and mobility," he said.

"I will not run again next year but Khoza and Nkosi have not made up their minds yet," said Tshabalala.

"We have other colleagues from other areas who are determined to enter the race next year to make it an annual remembrance and commemoration race. The publicity we got was overwhelming," he said

"Ours was just to raise awareness about what we go through on a daily basis at work; to say we won't forget our fallen colleagues because they paid with their lives while on duty."

Dubbed the People's Race, the marathon made history when a record 32000 runners - the highest field in history - pounded the streets and back alleys of Soweto last Sunday.