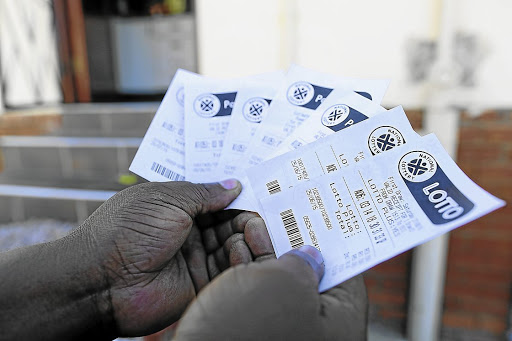 The joy of winning a R6m Lotto jackpot turned into sorrow for a pensioner.
Image: Stephanie Lloyd

A 53-year-old senior police officer is facing a lengthy prison term after being found guilty of stealing almost R2m of his elderly father's lottery winnings.

Warrant officer Mzamani Manganyi was found guilty of fraud by the Johannesburg Specialised Commercial Crime Court last week. He will be sentenced next week.

Manganyi, who was attached to the Protea police station, was arrested three years after the case was opened against him.

And now his 85-year-old father, Mkhatshane, says he would like authorities to throw away the key after throwing his son into a jail cell because "what he did to me is very painful".

The retired factory worker, who is spending his golden years at his ancestral home in Malamulele, Limpopo, said his policeman son did not only steal his money but also "destroyed" his cars.

"My heart is still sore," he said in a telephone interview.

"I have nothing to say to him. I hope I get my money back. He took my bakkies and drove them around Malamulele here and also borrowed them to his friends to boast about them.

"Now one of them has been wrecked and I don't know where the other two are. I used those cars to run my errands like collecting firewood and now I can't move around."

A 63-year-old grandmother of five who can neither read nor write is in a state of disbelief after becoming South Africa's latest millionaire‚ bagging ...
News
3 years ago

Manganyi senior said his son divorced his wife after allegedly stealing his millions and then built a new house on his property.

"The money he stole from me made him crazy. He let go of our makoti that we loved and started running around with other women. You must see the new big house he built with my money."

According to court documents, the convicted father of two allegedly committed the crime in November 2011 and a case was opened in February the following year.

"During October 2006, Mkhatshane George Manganyi (the complainant), won an amount of R6 113 744 from the national lottery. He invested R4m with Absa ...

"Mzamani Collars Manganye (accused) is the son of the complainant. During 2008 an application for cession of the Guaranteed Growth Capital investment was made ... for R1928950 payable to the complainant.

A cheque for the above amount payable to and in the names of the complainant was issued out ... but was deposited into the Absa bank account belonging to the complainant's son.

"According to the complainant, no permission, authority or consent was given to the accused to use the aforesaid money for his own purposes.

"The accused used the money for his personal benefit without the permission and/ or informing the complainant," read the charge sheet.

When applying for bail in 2014, Manganyi told the court that he was in the process of divorcing his policewoman wife.

"I am employed by the South African Police Services and stationed at Protea [in Soweto]. The SAPS have employed me since 1987," he had told the court.

Powerball winner wants to buy a house‚ car and a soccer team!

Education policies‚ investments and shares‚ a house‚ Mercedes Benz‚ a wedding and a soccer team.
News
3 years ago
Next Article