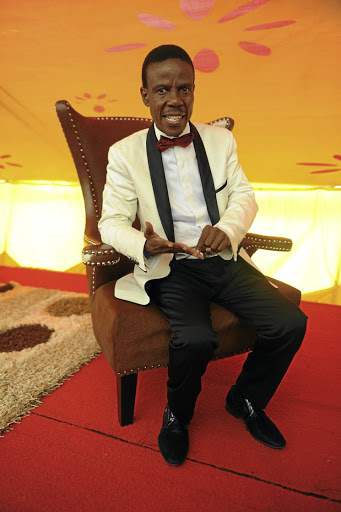 Prophet Paseka "Mboro" Motsoeneng alleges that there's a bullet with his name on it.
Image: Veli Nhlapo

This after Mboro informed police in Alberton and the Gauteng Organised Crime Investigation Unit that there is a bullet with his name on it.

The pastor alleged that he received a tip-off from his former bodyguard, who didn't want to be named, and a chief induna of Gauteng hostels Mehloayabuka Ndwandwe that an East Rand funeral parlour owner had hired assassins to kill him.

"This office can confirm an investigation on all the allegations. He [Mboro] is still engaged with the police to obtain more details regarding the threats," Dlamini said.

Ndwandwe confirmed that he informed Mboro of the plot to kill him.

"I heard [about the plot] at a hostel in Springs when a herdsman was attacked by the people who were hired to kill Mboro," Ndwandwe said.

"A mortuary owner from Katlehong felt that Mboro was an obstacle in his business. He then hired people to remove him, however, when they got to him [Mboro] he was with this herdsman.

"They followed the herdsman back to the hostel where they threatened him with guns to [stop hanging around] Mboro. They said they could not kill him [Mboro] because they knew him."

He said he was deeply disturbed by the plan as Mboro had been very helpful in their community.

"I'm planning to have a meeting with other indunas and also call the mortuary owner to talk about his evil deeds. We want him to know that we don't approve of his plan."

The bodyguard said he received a phone call from an unknown person in May who offered him money to kill Mboro.

"The second call came through in July and I immediately informed Mboro, but he just dismissed the threat and said nobody will be able to kill him. I rejected the offer because I'm not a killer, I'm a professional bodyguard," he said.

Nonhlanhla Khumalo, a member of the South African National Civic Organisation, said Mboro's fight with the parlour owner started when the man of the cloth advised her to open a case against the undertaker. This after Khumalo's gruesome discovery on the day of her infant's funeral that the right leg of her still-born child had been cut off.

"He [parlour owner] instructed me and Mboro never to come to his premises again when I demanded answers."

Mboro said he was not shaken about the plot. "Nobody is bigger than God. The community is on my side because all I do is to help the community," said Mboro.

Attempts to speak to the owner of the funeral parlour drew a blank.