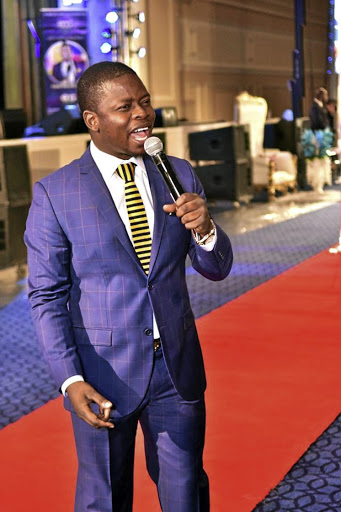 Shepherd Bushiri wants the SABC to witness first-hand how he conducts his Godly business.

This after the SABC was sanctioned to give Bushiri a right of reply after he had complained of the broadcaster's conduct at the BCCSA over two programmes aired in April.

Instead, the colourful prophet has invited Auckland Park to his Pretoria church headquarters to witness first hand how he conducts his Godly business.

All these details are contained in a legal letter dated September 3 2018 sent to the SABC by Bushiri's legal representatives in which he declines an invitation to appear on the show.

In the same letter seen by Sunday World, Bushiri's lawyers Baloyi-Ntsako Attorneys also suggested that the SABC could also broadcast that the man of cloth and his wife were recently bestowed with honorary doctorate degrees while in the US.

The SABC has been ordered to let controversial pastor Prophet Shepherd Bushiri respond to comments made about him during an interview on April 16.
News
3 years ago

"We at this juncture, reiterate that, right of reply is hereby in contrast extended to you by inviting you to church, ECG PTA, wherein you will have a feel and first-hand experience, to which should you so wish, you will be at liberty to broadcast your findings," reads Bushiri's response.

"Surely, its [sic] vigorously noticeable that focus has shifted and being Ambassador and moreover, his selfless dedication to the work of the Kingdom of God is of paramount importance and emphatically outweighs anything that seeks to deviate, discredit, and derail such mission ...

"Nevertheless, it cannot be ignored that our client feels right of reply has become irrelevant and unworthy to be considered and thus futile to remain in persuasion of same."

Mokhukhu singer says he sees God in the prophet.
News
4 years ago

SABC spokesperson Neo Momodu confirmed that Bushiri has sneezed at their invitation as ordered by the BCCSA. "The ruling clearly states that we should afford him his right of reply and he has indicated through his lawyer that he would not like to honour it and we respect his decision," said Momodu.

The SABC will also not accept Bushiri's invitation for a visit to his church, she said.

"There is no follow-up that needs to be done."

Bushiri's lawyer Ntsako Baloyi confirmed that the evangelist rejected the invitation, but he said it was due to his hectic schedule.

The episode between Bushiri and the SABC started in April after Sunday World reported that the police's elite crime-fighting unit, the Hawks, were probing the Bible puncher for money laundering. As a follow-up to our story, Morning Live hosted him to discuss the allegations.

Bushiri was not happy with the manner in which he was questioned, a complaint that was dismissed by BCCSA.

He however, became victorious in the second gripe where a guest was invited after him to talk about him and his church.

He complained that he was not given an opportunity to reply to the guest's criticism of him and his church.

Mabunda thanks preacher for his blessings.
News
4 years ago
Next Article