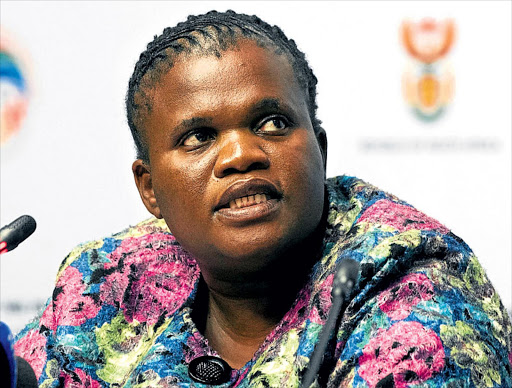 A leading figure in the Faith Harvest Bible Church and member of the ANC's Concerned South Africans Group allegedly used the name of the former minister of communications, and public service & administration, Faith Muthambi, to lure one of his office workers to the bushes, where he sexually assaulted her.

The woman (name withheld) told Sunday World their work necessitated the two to travel together to meetings and events. She said on that fateful weekend, she travelled with the man and two other colleagues to Thohoyandou, Limpopo, for a community meeting of members.

"We arrived in Thohoyandou on a Saturday night, July 15, for a meeting on July 16. That same night, the man received a call and told us it was Muthambi on the phone and she had asked to meet with him. He told the two colleagues to stay behind as he was only taking me to meet Muthambi.

"We drove for some time until I realised we were driving into some bushes. I became scared, I asked where we were going and asked him to call Muthambi again. He then made a call but the phone was off. I pleaded with him to drive out of the bushes because it was not safe," she said.

SIM swap done without her consent.
News
3 years ago

The woman declined to provide further details of the attack but confirmed she had opened a case two weeks later.

She further alleged that a certain cop at the Joburg police station discouraged from opening the case.

"The next day a friend accompanied me to Luthuli House, where I reported the matter. Through their intervention, a case was finally opened and the docket was referred to Thohoyandou where the incident happened," the woman said.

The woman said she also reported the man to the CCMA after he failed to pay her July salary and unfairly dismissed her on July 25.

Sunday World has seen WhatsApp conversations where the woman requests her money while the man tells her she will not get her full salary as he will deduct money he gave her for petrol and other things.

The woman further accused him of using names of prominent politicians to con people and promise them tenders, claiming he is also close to the president.

The politician acknowledged the case at the CCMA, but denied all other allegations against him. "I didn't do it. I am into politics where I fight corruption, so I would not do such a thing," the man said.

He accused the woman of plotting with his enemies. He said that he had fired her because she stole his personal documents, including an ID book and bank statements.

"If she said I sexually assaulted her in July, why didn't she open a case immediately?

"She can go and open a case and I will cooperate with the police," he said.

"I have never met or spoken to that person in my entire political life. I can't even tell how he looks like because I don't know him. It is disingenuous for him to mention my name. He must leave me out of his controversies," said Muthambi.

The PSC has launched an investigation into allegations that Faith Muthambi is running a bloated private office.
News
4 years ago
Next Article