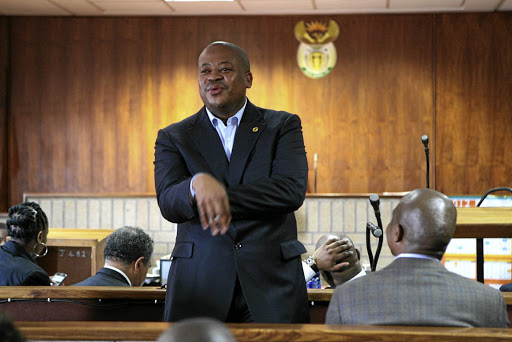 Chiefs manager Bobby Motaung is likely to be back in the Nelspruit Magistrate's Court to face charges of fraud relating to the building of the Mbombela Stadium.
Image: Gallo Images / Mohau Mofokeng

The Hawks and the National Prosecuting Authority in Mpumalanga have confirmed that they are reviving the fraud case against Kaizer Chiefs football manager Bobby Motaung and his business associates.

"We can confirm that the meeting took place in the Hawks offices where the decision to revive the case was taken," she said.

"However, the case has not been placed on the court roll yet, it is currently not with us but it's still with the Hawks," Nyuswa said.

Hawks spokesperson Hangwani Mulaudzi confirmed the revival of the case.

"The matter is receiving attention, but we are not obliged to discuss the details with the media," he said.

Hawks on trail of Motaung and Co over 'stadium graft'.
News
3 years ago

Motaung, who was quoted as saying reports that the case was being revived was fake news, couldn't be reached for comment at the time of going to press.

His lawyer advocate Zola Majavu said: "I find it very strange that they confirm to you instead of informing us first. I spoke to the head of the Hawks about this matter and for that I can't comment."

Motaung and his business associates Herbert Theledi and Marius Grib found themselves on the wrong side of the law after they allegedly submitted fake documents in their company Lefika's bid to design Mbombela Stadium.

But, the case was struck off the roll after the NPA had declined to prosecute them.

However, Sunday World reported earlier this month, after learning from impeccable sources, that the case would be brought back to the courts.

This after a meeting was held at the offices of Hawks' senior officer Basi in Pretoria on June 20, where a decision to resuscitate the case was taken.

Those who attended the meeting included Nkuna of the Specialised Commercial Crime Unit and investigating officer Mashamba.

Kaizer Chiefs boss and businessman Bobby Motaung is set to lose his R3.2-million Bentley Continental GT to the bank. That is because Motaung has been ...
News
4 years ago
Next Article