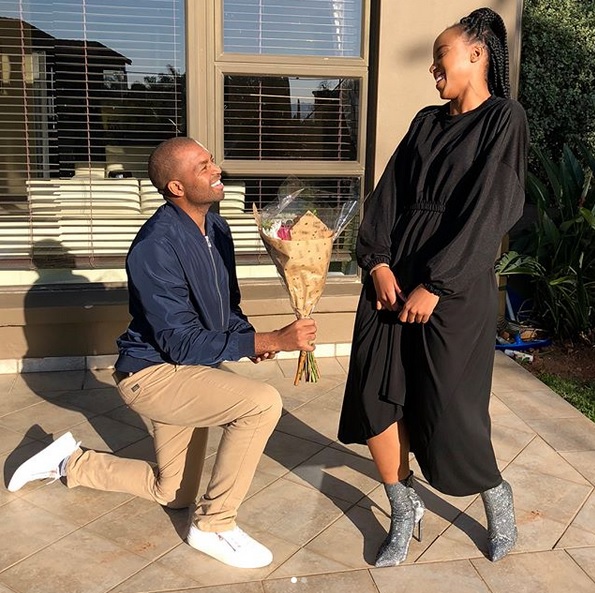 The sports car that nearly killed socialite Sbahle Mpisane in a crash had been a generous gift and a gesture of love from boyfriend and soccer star Itumeleng Khune.

It has emerged that the high performance BMW 440i Cabriolet - which was torn apart when it ploughed into a pole and palm tree in the early hours of Thursday - is registered under Khune's name. The car's price ranges from R1.3-million to R1.6-million.

The young woman, who is well-known as a fitness trainer, is the daughter of controversial business couple Shawn and Sbu Mpisane.

Now, as she clings to life in a Durban hospital, Khune will be forced to face the reality that a show of largesse - a birthday gift - was involved in the crash.

The two have had a hot and cold love affair since 2015.

The pair had stayed friends after officially parting ways in 2016, and last month they officially confirmed they had rekindled their romance.

The reunion was said to have come shortly before her birthday in June, when she was first pictured atop the blue sports car.

Sources saidMpisane had been gravely wounded and remained "unstable" - breathing through a tube with the assistance of a ventilator.

One of the first paramedics to arrive at the scene said she was "barely breathing". 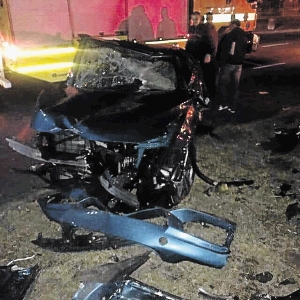 The wreckage of Mpisane's BMW M4 that's worth over R1-million.

"She was in a bad way. She had a massive head injury and was barely breathing," said the source, adding that both her arms were fractured and she also had a broken leg.

"She was in a critical state."

The moments that followed the impact saw the heroic actions of personal trainer Brian Dube, who battled a fire which was set to engulf the damaged sport scar.

He had been lacing his trainers before an early morning shift on Thursday and had barely rubbed the sleep from his eyes when he heard the sound of crunching metal.

"It was around 4am and I was getting ready for my shift at the gym," said Dube.

"I heard the sound of a car hitting the tree outside. I ran to the window and I saw the car upside down. I ran downstairs and I could see that the car was on fire.

"I grabbed a fire extinguisher from my building and with another man we managed to put the fire out."

Sbahle Mpisane is in a critical condition at a Durban hospital after being involved in a serious car crash.
Entertainment
2 years ago

At the time he had no idea the woman in the driver's seat was Mpisane.

On Thursday, blood still stained the grass where Mpisane had been laid by the paramedics on the centre island on Margaret Mncadi Avenue, along the Durban harbour.

An assortment of items including a single yellow rose and a torn Zara accessory box lay on the grass alongside broken debris from her wrecked car.

Standing on the spot where he'd quelled the fire which saw flames billowing from the engine compartment, Dube said that the damage to the car was unbelievable.

"The passenger side [of the car] was broken like nobody's business.

"Her side was crushed and the door had been torn off. I didn't even try to move; I just watched her. I thought she was dead.

"She couldn't move and she couldn't talk. I actually only realised that she was alive after about 10 minutes when I saw her arm move.

"I found out later that it was Sbahle," Dube said.

An accident reconstruction specialist, who spoke to our sister paper Sunday Times on condition of anonymity, said there was little doubt that it had been a "high-speed" crash.

The spokesperson for SAPS, Colonel Thembeka Mbele, said that a case of reckless and negligent driving was being investigated in connection with the accident.

Speaking from the hospital in Durban, Sbu Mpisane said that his daughter has proven she was a fighter.

"If you look at the actual accident she should have died there on the side of the road, but she's fighting," he said.

He said that she had undergone emergency surgery on Friday night and was critical but stable.

"She is no longer on life support and the operation went well."

"She had sustained multiple fractures and they [staff] needed to deal with the orthopaedic side of things. We are just praying now," he said. - Additional reporting by Lwandile Bhengu

They've been through the most and at one point decided to keep their relationship out of the public eye.
Lifestyle
3 years ago
Next Article