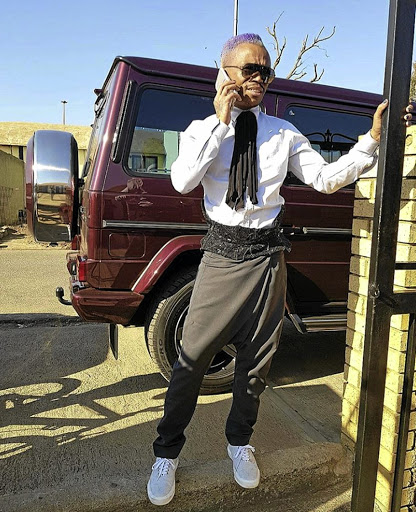 Local reality star and Idols SA judge Somizi "Somgaga" Mhlongo almost parted ways with his luxurious set of wheels worth almost R2-million when the car was hijacked this week.

The Mercedes-Benz G-Wagon was hijacked on Monday night in Ridgeway, Joburg south, but was later recovered only 16km away in Eldorado Park.

Mhlongo's friend and businessman Leeroy Sidambe was driving alone when the hijackers pounced on the Kliprivier Road offramp on the N12 highway.

Relieving the ordeal to Sunday World, Sidambe said he was driving home after attending the Brics Summit gala dinner in Sandton when four armed men approached him.

Sidambe said the suspects bundled him into the back of the car and drove around with him for hours before dumping him at an informal settlement in the Vaal.

"When they approached me I begged them to spare my life because I have a wife and children to take care of. I asked them to take everything and not harm me," he said.

Sidambe said the suspects took his business and personal bank cards and withdrew about R21000 from the accounts.

"They took groceries that I had bought, my iPhone, a wrist watch, a wedding ring as well as clothes.

"I had to walk on foot to the nearby settlement and asked for a phone. I called my wife and Somizi to notify them about the incident. I then went to the police station to open a case."

Sidambe said he was still shaken by the incident and was undergoing counseling to deal with the trauma.

Spokeswoman for the Booysens police Lorraine van Emmerick confirmed that the car was found abandoned at Eldorado Park and that no one had been arrested.

This follows homophobic and racial comments posted on social media pages belonging to Lia Meyer and a comedian Careless D.

In the post on Meyer's page, the k-word was used against Somgaga. The woman later apologised, saying her account had been hacked.

Careless D posted an open letter on Twitter saying that Somizi and his "gay friends" dressed like clowns. He also apologised.

The joke's on Somizi

Somizi included in Blacks Only.
Entertainment
3 years ago

"Given Mhlongo's artistry and social standing, these posts drew unprecedented coverage and publicity both nationally and internationally. Following consultation with his management team and legal advisers, Mr Mhlongo decided to approach the commission to secure his rights and restore his dignity.

"It is Mr Mhlongo's view that the two individuals who posted these distasteful comments and video were engaged in conduct and speech that violated his right to equality and human dignity.

"He further feels that these posts illuminate the nature and prevalence of prejudice-motivated hate speech and victimisation against the LGBTIQ community and black people in South Africa."

HRC spokesman Gushwell Brooks confirmed that they received a complaint from Somizi and were investigating.

Somizi's manager Thato Matuka of Brand Arc confirmed the incident and said they were happy Sidambe was safe.

Somizi Mhlongo is non-stop, and he’s got his sights set on working with Beyoncé.
S Mag
4 years ago
Next Article