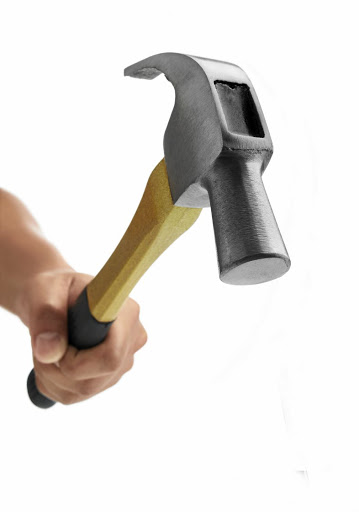 A kwaai Soweto shebeen queen has hammered to death two would-be robbers or rapists who broke into her shack when she was sleeping during the wee hours of a Saturday morning two months ago.

The woman, who cannot be named for legal reasons, was arrested and charged with two counts of murder by the police. But the Orlando Magistrate's Court has referred the matter back to the police for further investigation and released her on warning.

The woman has now fled her shack and in hiding after the community members who were angered by the court's decision threatened her. The community members, who are led by DA shadow minister of sports & recreation Tshepo Mhlongo, allegedly threatened to bring the court to a standstill tomorrow if the matter is not placed on the roll.

NPA South Gauteng spokeswoman Phindi Mjonondwane confirmed the NPA had referred the matter to the police.

"The police must, among others, get the pathologist report and send it to us before we can take a final decision on the matter," she said, pleading with community members to remain patient.

Two men accused of the murder of ANC Youth League figure Bongani Mkhize made a brief appearance in the Umlazi Magistrate’s Court on Monday.
News
3 years ago

"We sympathise with community members but we plead with them to bear with us and allow the investigation to be completed. It is really unfortunate that our prosecutors found themselves in this situation, but the only way we can resolve this matter is for them to allow the investigations to be concluded," she said.

Police couldn't be reached for comment at the time of going to press.

But three justice officials, who are close to the case, confirmed the 56-year-old woman from Bomba informal settlement in Orlando, was arrested for two counts of murder but was released by the court.

" The woman said that she was sleeping in her shack at about 2am when two young men arrived and called her by her name and asked her to open the door. When she refused they broke the door and forced their way into the shack. She then hit them several times with the hammer and killed them instantly," said the court official who didn't want to be named because he is not allowed to speak to the media.

Another court official, who also declined to be named, said the court didn't want to prosecute the case because there was evidence that the door to the shack had been broken. "What we wanted was a report from the pathologist to determine if she overstepped the boundaries of self defence. If she continued to hit them with the hammer even when they were unconscious then she would have overstepped the self defence boundaries and we will definitely charge her with two counts of murder," said another official.

Another official said the report would also shed more light on which blows could have killed them.

Police withdrew charges against Middleburg men who allegedly beat a person to death.
News
3 years ago

"We may also charge her with murder if the report could indicate that they were possibly unconscious after the first blows were struck. But what we learnt was that the report indicated that even the first blows could have caused death because they were so severe," said the official.

Mhlongo confirmed they wanted the woman to be charged with murder. "I have written to the court and stated the reason why we want justice to be done because we believe that justice delayed is justice denied," he said.

"What we know is that this woman hit these boys with a five pound hammer, but when the police arrived at the murder scene she gave them a smaller hammer.

"We also learnt that these boys were not there to cause trouble but to demand change (that the woman owed them following a drinking session). There is also a witness who said this woman continued to hit them with the hammer even when they were unconscious. Also the door was not broken and their bodies were not found in the house but outside," he said.

Three men have been arrested and another man has escaped after a shootout and car chase with police on Thursday morning.
News
3 years ago
Next Article