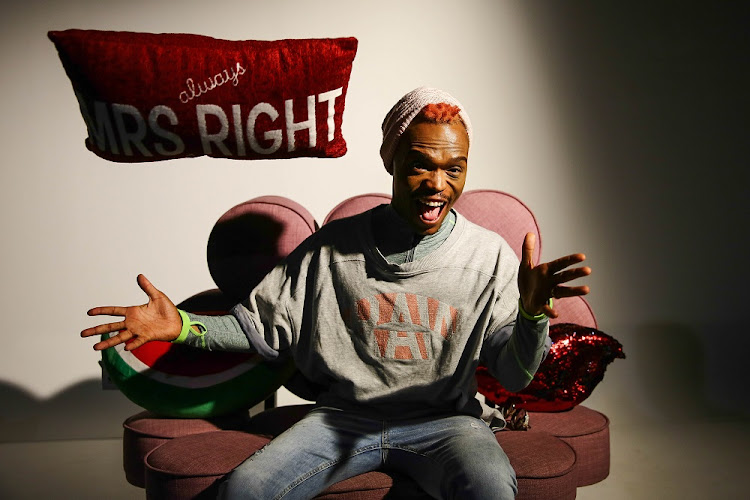 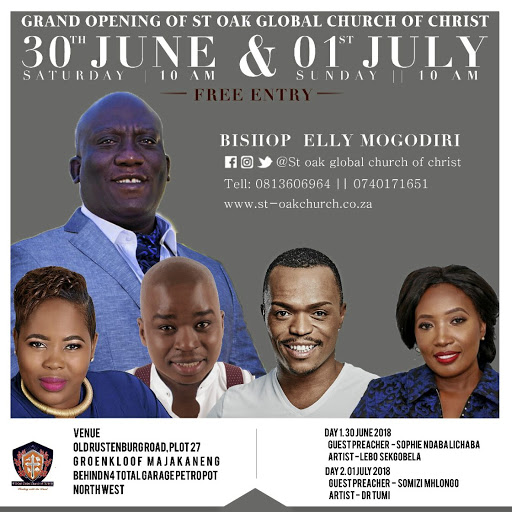 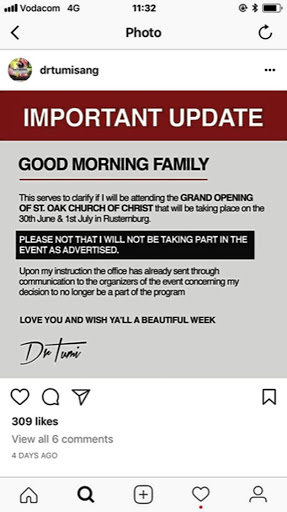 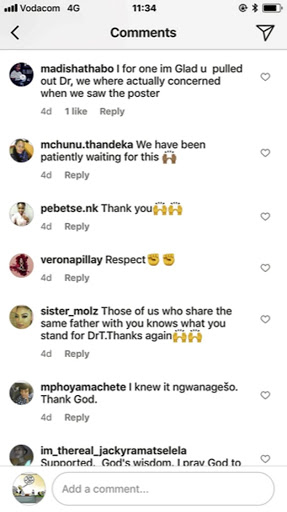 Gospel sensations Dr Tumi and Lebo Sekgobela have pulled out of the consecration show of a church in North West, allegedly after learning that gay icon Somizi Mhlongo was going to be a guest preacher.

Dr Tumi and Sekgobela were booked by event organiser and former Generations actress Sophie Ndaba to showcase their talents at the consecration festival of the St Oak Church of Christ in Majakaneng, Brits, on June 30 and July 1.

Somgaga, as the artistically gifted Somizi is often referred to by his fans, was scheduled to preach on June 30, the day Dr Tumi was expected to perform.

Ndaba was also expected to be a guest preacher on July 31, the day Sekgobela was supposed to strut her stuff.

But, after Ndaba sent them a poster of the event, which featured herself and Somizi as guests preachers, the two mega gospel singers took to social media and announced their withdrawal from the event.

"Upon my instruction the office has already sent through communication to the organisers of the event concerning my decision to no longer be part of the programme. LOVE YOU AND WISH YA'LL A BEAUTIFUL WEEK," Dr Tumi announced on Instagram.

"GREETINGS FAMILY...!KINDLY NOTE THAT IM NOT MINISTERING AT ST OAK CHURCH OF CHRIST ON THE 3OTH JUNE 2018. THE ORGANISERS HAVE BEEN INFORMED OF THE DECISION. GOD BLESS YOU ALL. LOVE YOU"

Mhlongo has become the first African man to be a brand ambassador for women's make-up, Black Opal announced yesterday.
Entertainment
4 years ago

Desperate attempts by Ndaba to convince the pair not to pull out hit a brick wall.
Although the two did not provide Ndaba with the rationale behind their withdrawal, fans on their social media walls lauded them for their decisions.

Ndaba said: "We booked them to perform and deposits were paid into their accounts as agreed. We then sent them a poster to advertise the event on their social media accounts. Instead, they sent me an e-mail and said they were no longer wanting to be part of the event. I think speak to Bishop [Sello] Mogodiri as he is the custodian of the event," she said.

Mogodiri said: "If what is said on social media is true, that they didn't want to share the stage with Somizi, then they need deliverance because Christians are not supposed to be judgmental."

Attempts to solicit comment from Dr Tumi drew a blank. He initially asked to be called later but never responded.

Sekgobela's husband and manager Lucky Sekgobela said they withdrew from the gig because the contract they signed with another promoter to perform in Sun City decrees that she shouldn't showcase her talent in the area close to it or on a date that was near the event.

Somizi turns to lawyers after racist tweet: 'No place for racists in SA'

Somizi Mhlongo is taking action after he was the target of a racist tweet, despite claims that the account holder's account was hacked.
Lifestyle
4 years ago

"The event you are talking about is happening between June 30 and July 1 and the event of the other promoter is on August 4.

"It is not true that Lebo doesn't want to share the stage with Somizi.

"That is something that we learnt on social media," he said.

Asked why she kept mum when people used her name to perpetuate homophobia, he retorted: "You can't correct the public."

Somizi, speaking through his manager Thato Matuka, said: "We saw the comments on social media but we didn't want to jump to conclusions out of respect for our colleagues.

"However, the comments were disturbing as they insinuate homophobic behaviour. We condemn that behaviour in any form, especially from people who occupy prominent positions in society.

"Somizi is a good friend to Lebo; he spoke to her directly. Lebo stated a contractual reason for pulling out, which we respect.

"Unfortunately, we could not get hold of Dr Tumi. However, we respect his reasons for pulling out."

Madi thought Nomzamo Mbatha looked great, although the dress was a bit too tight.
Opinion
4 years ago
Next Article