'MEC tried to block arrest of her son' 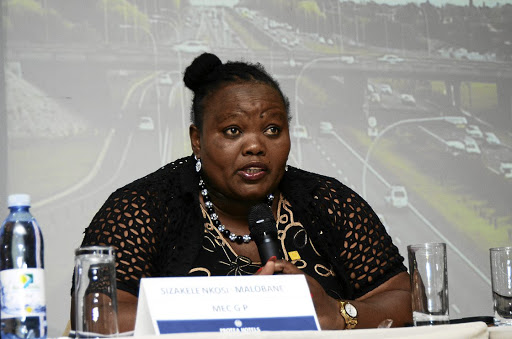 Gauteng MEC for community safety Sizakele Nkosi-Malobane allegedly threatened a female police officer when she attempted to arrest her son a day after Freedom Day, April 27.

It is alleged that Nkosi-Malobane, who is the political boss of police in the province, called the officer stupid and incompetent and accused her of having taken a bribe from Orlando Pirates legend Williams Okpara.

This came after Williams Okpara Junior, 25, son of the legendary footballer, opened a case of common assault and intimidation against Nkosi-Malobane's son Mzamo Tony Nkosi and his ex-girlfriend late last month after they accused him of abusing their relative.

Sunday World understands that the officer, Sergeant Lydia Matlapeng, who is attached to Alexandra police station, informed her superiors that the MEC also threatened to beat her up if she went ahead and arrested her son.

These details about the MEC's alleged rantings against the officer were confirmed by two of Matlapeng's colleagues, one of whom was at the scene.

According to his affidavit, seen by Sunday World, Okpara Jnr was allegedly roughed up by Mzamo and his baby mama Philisiwe Pride Nkomo outside the Wynberg Magistrate's Court. He said they punched him while he was walking with his lawyer and mother Stella.

He stated that his lawyer and mother tried to stop the two, to no avail. He told police that they chased him down the passage of the court building until the parking lot outside.

"While all these things were happening, I was keeping quiet," he said.

He said his mother tried to drive away but Mzamo ran up to the car's window and shouted at him, saying "do you think it's over? I know where you are staying," said Okpara .

Police spokesman Justice Malatji confirmed that Okpara opened a case of common assault and intimidation at the station against Mzamo and Nkomo. He said the former lovebirds were arrested and Nkomo appeared in court while Mzamo was still to appear.

On the incident involving the MEC and Matlapeng, Malatji said it was an internal matter and that they can't confirm or deny the incident.

"The investigating officer has refused to comment on the matter," Malatji said.

However, an officer attached to the station, who asked not be named because he was close to the case, confirmed that Matlapeng has laid a complaint against the MEC.

"The matter has been forwarded to the province by the station commander," said the officer.

The same officer revealed that the investigating officer was shaken when she arrived at the station after the incident.

"She did not believe that the MEC, who understands the law, would treat her like that. She was scared that she was going to lose her job," said the officer.

The officer further revealed that the investigating officer was later approached by a man who introduced himself as Mabunda, claiming to have been sent by the MEC to apologise to her on her behalf.

"The guy is known at the station and he told her the MEC was inviting her to coffee at her house and that she wanted to apologise. All I know is that Matlapeng refused to go," said the officer.

Nkomo confirmed she and Mzamo were arrested in connection with a case of common assault and intimidation: "I have already appeared in court on the 7th of May 2018 and I will be going back again."

Okpara's mother Stella and his friend Isaac Nthotso have both deposed statements at the station as witnesses in support of his version of events.

In their affidavits, the two witnesses both stated that Okpara did not retaliate when he was allegedly beaten up by the duo. Okpara confirmed the case but said he could not comment further as the matter was before the court.

Case dropped after man shown to be unstable.
News
4 years ago

Stella said she was in the company of the investigating officer when the MEC allegedly abused her.

"She accused the poor police officer of taking a bribe from us and said she will beat her if she arrested her son. We just stood there and watched," said Stella.

Mzamo asked to be sent questions via SMS but had not responded at the time of going to print.

MEC Nkosi Malobane said: "In any criminal case the relationship between the victim and the accused is a very sensitive space. It is very unfortunate that the investigating officer flouted some important procedures pertaining victim-perpetrator relationship by bringing a suspect involved in a criminal case affecting the MEC's other family member to her private home.

"The investigating officer failed in [her] duties to exercise caution and show sensitivity given the case that the MEC's other family member is involved in. The matter has nothing to do with the public position that she holds but rather a principle regarding the treatment of victims in any criminal case. In spite [of] the public position she holds the constitution still guarantees her the same rights as any other citizen as a victim."

Former Orlando Pirates star and Bafana Bafana player Andile Jali was nabbed on the weekend in Pretoria for alleged drunk driving.
News
4 years ago
Next Article