Engcobo church linked to a family murder in KZN 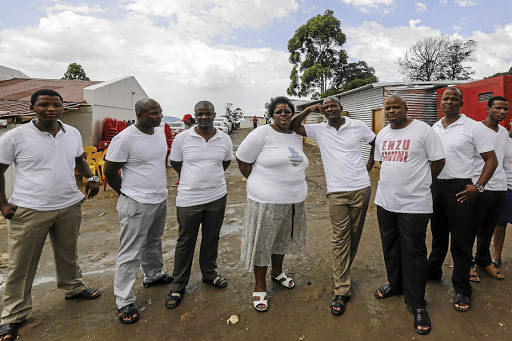 The sons of the late ministry founder Siphiwo Mancoba flank their mother, Noluvo Mancoba, in the church's compound in Engcobo, Eastern Cape. They are linked to more murders.
Image: Adrian de Kock

The fatal shooting of an Umzimkhulu couple in KZN who had close links to the Mancoba family in charge of the notorious church in Engcobo, Eastern Cape, remains a mystery.

The couple, Ndumiso Jali and his wife, whose name is not known, were shot dead in cold blood at their New Clydesdale village home in Umzimkhulu last month. This was a few weeks before the massacre of the Ngcobo police station officers allegedly by people linked to Seven Angels Ministries .

The Jali family's relationship with the Mancobas soured when Siphiwo Mancoba, the church founder, was killed and burnt inside the church premises in Umzimkhulu in April 2015. No one was arrested for the murder. Sources close to the Jali family allege that the Mancoba congregation "promised to come back and deal with the person who killed their father".

"It is well known here in Umzimkhulu that Mancoba refused to move off the Jali family land, and they physically fought and Mancoba was killed and burnt. His family was chased away," said a source.

Malusi Gigaba has expressed his "dismay at the wanton disregard of the law" by allegations against Mancoba church.
News
3 years ago

"When we heard the news of the police shooting and heard the Mancoba brothers were allegedly involved we immediately linked them with the Jali case as they were the first on the scene to demand the couple's corpses as they claimed they belonged to their church.

"How did they travel all the way (340km away) to be here immediately after the fatal shooting of the Jali people?," asked a source, a former member of the church.

The Mancoba church started to show signs of a cult in Centane where they were chased away by a village chief after church members, led by Siphiwo Mancoba, recruited villagers and school children.

Nomawethu Mamvana, whose relative left her nursing post to join the church in the late 1990s, said the incident in Centane shocked the "close-knit community of Tafalofefe".

"My aunt took everything she had, all the money she had, and her children to join the church and they were all told not to greet people or their relatives. Later, many breadwinners ran to this church and the community took a decision to burn [it] down," said Mamvana.

Sometime before 2000, amid fears of a millennial Armageddon promoted by the Mancoba family, they fled Centane under a cloud and moved to Umzimkhulu where they joined forces with the Jali family.

The Jali family gave Mancoba land to pitch his church tents while Jali became one of the church's senior leaders.

In 2013, after a decade of operation, the church was raided by KZN government officials.

It was accused of violating children's rights for keeping them away from school. Mancoba and Jali were arrested together with 33 parents of 62 children found on church premises.

In April 2015, Mancoba was killed, allegedly by Jali after they fought over land.

Early last month, Jali and his wife were shot and killed in their beds on the church premises. In the early hours of the morning, Mancoba's sons arrived to remove the bodies from the church but the Jali family refused. Jali's son Msizi, speaking through a friend, said it was too early to talk about the tragedy. Banele Mancoba, who speaks on behalf of the Seven Angels Ministries, said he "was too busy to speak to media".

Fellow students are planning to mobilise against the ongoing warfare between the meter-taxi and app-based taxi services.
News
3 years ago
Next Article