The Nkunzi of Nkandla, his critics and protectors 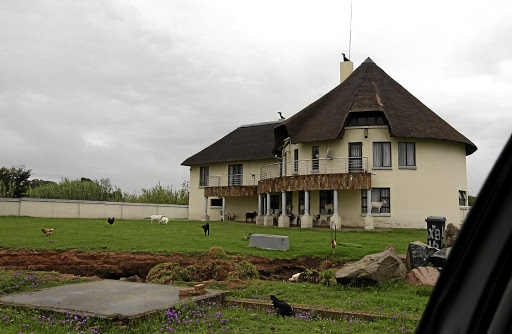 A day after Jacob Zuma resigned as president of the country, Sunday World visited one of his avid supporters and former MP Pretty Xaba at her posh home in Glen Austin, Midrand, to hear what she had to say about Zuma's recall.

Xaba welcomed us into her house, albeit unhappy that we rocked up uninvited. The first picture that greets us on the wall of what looks like a storage room is of Zuma.

Moving into the main sitting room, the TV cabinet is adorned with images of the former president and several members of parliament. An image of Xaba and Zuma above the TV takes centre-stage.

In a hostile disposition, Xaba tells us not to ask her questions about the ANC. She immediately increases the volume of her TV, where a discussion is being held on ANN7 about Zuma's exit.

"I have never been a member of the ANC, it is my twin sister [who's an ANC member] not me. Don't come to my house and ask me questions about the ANC. Leave me alone," she said. 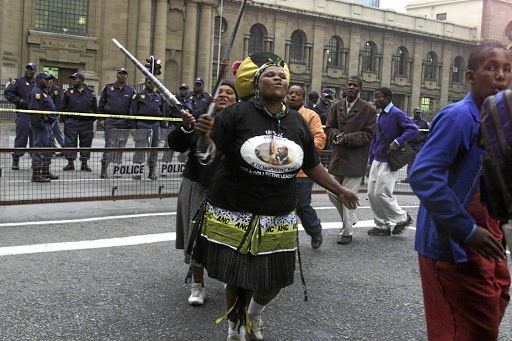 "MaMkhize" joined the ranks of the 400 MPs in 2009 after she became Zuma's number one supporter during his rape trial in 2006," one of her former colleagues, who spoke on condition of anonymity, said Xaba's luxurious lifestyle at the plot is still a mystery to all her colleagues.

"Indeed, Zuma looks after his people. Xaba was an assistant teacher earning about R2500 at Dr Mathole Motshekga Primary School in Ivory Park, Tembisa, on the East Rand. All of a sudden she became an MP, she could afford a plot and had security guards," said the colleague.

During her stint as an MP, Xaba's salary increased to a whopping R800000 annually from the R30000 pre-tax annual salary she used to earn. "It did not make sense to most of us, but we had to understand that she put herself out there."

The colleague also said that Xaba had no track record of ANC activism before the trial.

"She came out of nowhere and became an MP with no education.

"The support for Zuma during the trial must have been the reward," the colleague said.

Xaba was also known to the public as the  "iMpepho Lady".

She regularly hogged the headlines during the rape trial for her support of Zuma in the South Gauteng High Court in Joburg.

Some propped him up while others held him to account

If Jacob Zuma's presidency was characterised by a God complex, it is because of the people around him who treated him like one.

With his projection of humility, his accessible demeanour and his excellent people skills, Zuma is perhaps the most versatile leader of the ANC. He could charm captains of industry as effortlessly as he would ordinary South Africans.

In propping up Zuma's presidency, there have been as many male and female protectors and cheerleaders around him as his fierce critics. Through these personalities, South Africans have been able to know Zuma the leader, the father, the husband, charmer and villain. After his dramatic political exit on Wednesday, Sunday World looks at 12 powerful females figures who have defined the important milestones of Zuma's journey.

His daughter with late wife Kate Mantsho who famously barred the ex-president from her funeral after she committed suicide due to an allegedly unhappy marriage with him. Duduzile was thrust into the spotlight during her father's rape trial in 2006 as she stood by his side every day. Her testimony about the events leading to the alleged rape tore at the credibility of the accused and was largely credited for setting her father free. Of her four other siblings, her twin Duduzane is alledged to be the fixer in Zuma's state capture project because of his proximity to the Gupta brothers.

Zuma's rape accuser and HIV-positive daughter of his old friend Judson Kuzwayo died last year but she was at first an object of vilification. His supporters dismissed her claims and said they were part of a honey-trap plot to prevent Zuma from ascending to the throne. Despite Zuma's acquittal, Khwezi continued to swim against the tide, and at a great security risk to her family, to continue to expose the villainous nature of Zuma. Only after her death in 2016 and the subsequent release of her biography, written by Redi Tlhabi, did some politicians reluctantly admit they believed her claims.

The number one supporter of Zuma during his rape trial, Pretty Xaba was the antithesis of feminism as her voice was the loudest to condemn Khwezi during the rape trial. Burning impepho and holding a make-shift wooden machine-gun, the symbol of Zuma's anthem, Xaba's political fortunes soared after his acquittal when she became an MP in 2009 before slinking away from the spotlight.

The daughter of Orlando Pirates owner Irvin Khoza, who is also said to be a Zuma ally, became known when it was revealed that she bore a daughter out of wedlock with him during the 2010 World Cup year. The revelations came a month after Zuma married his fifth wife. He apologised to the country and paid damages (a fee to traditionally acknowledge paternity in a pregnancy). 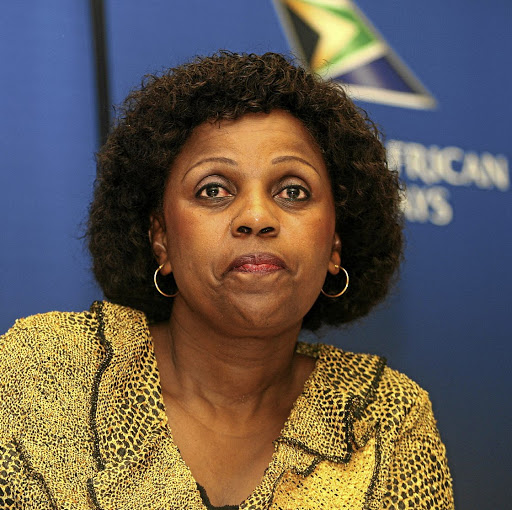 The former chairperson of SAA once vowed to stay on in the airline "until uBaba goes". Her close association with Zuma was never explained but she enjoyed protection from the president despite running the airline into the ground. Eskom's former board chair, Zola Tsotsi told parliament how she had organised a meeting with the president where they dictated to him to suspend Eskom executives.

Not much is known about the former Johannesburg ANC regional secretary who is media shy. When the chips were down for Zuma after he was fired by Thabo Mbeki in 2005, she bought him a R3.6-million mansion in Forest Town and later became an MP. Dlamini-Dubazana is said to have later benefited handsomely from state loans and a rescue package for her game farm but denied preferential treatment.

Of the six wives Zuma married, Ma-Ntuli represents the villain who soiled the reputation of the clan. She was the subject of tabloid fodder when aspersions were cast after her bodyguard died mysteriously amid rumours they had had an affair. MaNtuli was exiled from the Zuma homestead after sources claimed she tried to poison him. Although the Hawks confirmed she was a suspect, she was never charged.

MaKhumalo, on the other hand, represents the long-suffering black woman who spent years waiting for Zuma to come back from jail or exile. They've been married for 45 years and were childhood sweethearts. Zuma is expected to return to MaKhumalo and the infamous Nkandla homestead to enjoy his pension years. 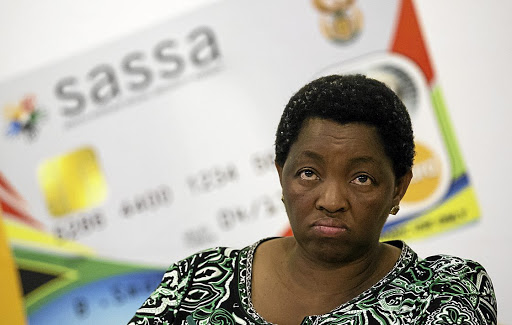 Incoherent at the best of times when addressing the media, and a fierce Zuma protector, Dlamini's defining two moments were when she berated the four young women who bravely ambushed Zuma at the local government election results with a protest to honour Khwezi. Dlamini called a press conference after Zuma's candidate, Nkosazana Dlamini-Zuma, lost out to Cyril Ramaphosa at the party's election last year. On both occasions, Dlamini, as head of the ANC Women's League, was judged harshly for selling out women by defending a patriarchal agenda.

Mama Action has always been good at articulating her views to the media. Defending Zuma's leadership, Mokonyane famously said ANC ministers were willing to defend Zuma with their buttocks. "Re tlo thiba ka dibono" she told a crowd in Mpumalanga in reference to an idiom that they would be ready to wage a fierce battle to defend their leader. She later made more provocative statements about the rand after Zuma's umpteenth cabinet reshuffle tanked the currency by saying "if the rand falls, we will pick it up." 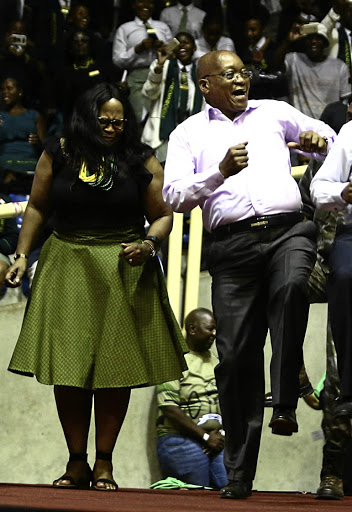 After releasing the Secure in Comfort report on the misuse of hundreds of millions of rand to build Zuma a lavish homestead, Advocate Thuli Madonsela became public enemy number one for Zuma fans when she released the state capture report in 2016 that pointed to an improper relationship between Zuma, some ministers and the Gupta family to loot state funds. Besides Zuma violating the executive ethics code and constitution, he boldly protested his innocence, conceding only later, after he was found wanting by the Constitutional Court and the High Court in Pretoria. If there is one lawmaker who has given Zuma sleepless nights, it is Madonsela.

With pressure mounting for ANC leaders to speak out against the president's role in state capture, former MP Vytjie Mentoor used the power of social media to tell her own story. In the most dramatic fashion, she told of being offered a job at the Gupta compound with Zuma in another room.

She later accused the president of sexually harassing her by trying to stick his hand between her legs before she smacked him on his face with her handbag.

Officially endorsed by Zuma as his preferred candidate, the former AU chairperson was dismissed by Zuma's detractors and accused of attempting dynastical politics. Zuma's former wife put up a fierce presidential campaign that looked sure to succeed but it bombed spectacularly in Nasrec in December. She is credited as one of the voices that implored Zuma to finally step down on Wednesday.