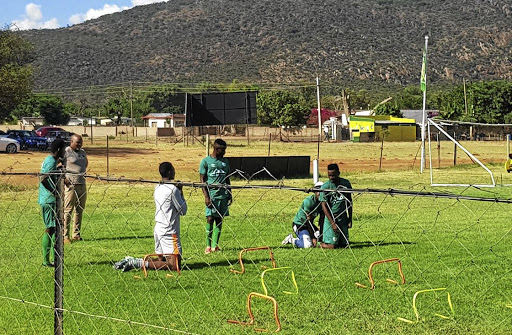 Some Baroka players training separately from the rest of the team at Seleteng, GaMphahlele, including captain Olaleng Shaku, far left. Watching them is CEO Morgan Mammila. /Tiyani Mabasa

Baroka have insisted that only coach Kgoloko Thobejane has been suspended by the club but our sources are singing a different tune.

The club confirmed to Sunday World that Thobejane has been put on ice, but refused to give their reason for the decision.

Sources, however, have painted a different picture and claimed that Thobejane was not the only one who's suspended and evidence to back up their claims is that the players who are suspended are training on their own.

In Thobejane's absence, assistant coach McDonald Makhubedu and their Multichoice Diski Challenge mentor Matsimela Thoka will be in charge, while technical director Doctor Khumalo remains in his current role and will not be anywhere near the bench according to Mammila.

Despite Mammila's denials, three sources confirmed to us that there are players who are suspended owing to an incident that happened after their 2-0 loss to Free State Stars away on February 3.

Phiri happy to be alive after robbery

It's claimed that Thobejane was drinking on the job with the players after the match, hence his suspension.

"I heard about those rumours, but that's not true. It's for something else," said Mammila, but insisted he wasn't going to air their dirty laundry in public.

The sources alleged that Thobejane, captain Olaleng Shaku, goalkeeper Oscarine Masuluke and midfielder Sipho Moeti were involved. None could be reached for comment on the allegations.

Mammila said that the club was yet to set a date for Thobejane's disciplinary hearing, while insisting that the players would not form part of the process.

Bakgaga are currently ninth on the PSL standings after 20 matches.

Baroka FC coach Kgoloko Thobejane has been suspended‚ the club have confirmed.
Sport
4 years ago
Next Article