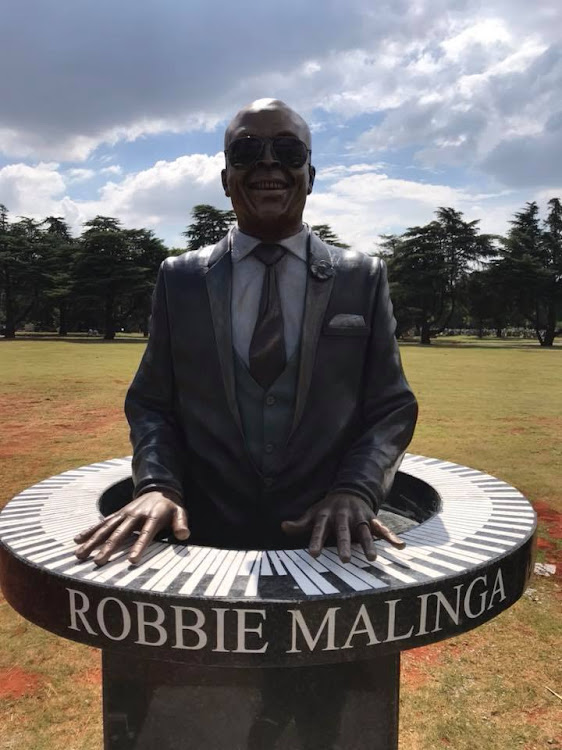 After undergoing a complete redesign‚ Robbie Malinga's friends and family gathered at the Westpark Cemetery in Johannesburg on Tuesday afternoon for the unveiling of his new tombstone.

The veteran music producer died from stage four pancreatic cancer on Christmas day and was buried early this month.

The initial 7-ton tombstone‚ which was erected on the day of Robbie's funeral had to be removed after it drew sharp criticism on social media over a lack of resemblance to the music icon.

"I’m too emotional to talk‚ but what I can say is that we are happy with the work. There is so much resemblance now especially the head‚" said Bheki.

Just weeks before his death‚ music veteran Robbie Malinga sat across from afro-jazz sensation Naima Kay and gave her a gift‚ a song that would be the ...
Shwashwi
3 years ago

The initial life-sized statue has been replaced with a half-body sculpture of the singer dressed in a black blazer‚ grey shirt and his signature sunglasses. The stone also includes a piano and a replica of all the awards Robbie has scooped over his 20-year career.

Robbie's long time friend and musician‚ Doc Shebeleza who was also helped organise the musician's funeral said that even though they were not satisfied with the initial tombstone‚ Ann had to make the final decision to remove it.

“As much as we knew him‚ we could not say much. We were there to help as we knew our brother‚ as much as we were not happy with the statue‚ Ann had to make the final decision without us being seen as meddling. But I was kept informed of all the developments and I am happy with the recent work‚” said Doc Shebeleza.

CEO of Bataung Memorials‚ Lebohang‚ Khitsane‚ said he had to change everything and make something that has more character and embodies Robbie's life better.

"It took a week and half to complete the work with a team of six artists assigned to redo the face. I’m really happy with the outcome. We made a lot of changes so that it represents the life of a singer."

Those close to music veteran Robbie Malinga have gathered at the Rhema Bible Church in Randburg on Tuesday to bid farewell to him.
News
3 years ago

CEO of Bataung Memorials‚ Lebohang Khitsane‚ has revealed to TshisaLIVE that the redesign of Robbie Malinga's 7-ton 'tombstone statue' is already ...
Entertainment
3 years ago
Next Article