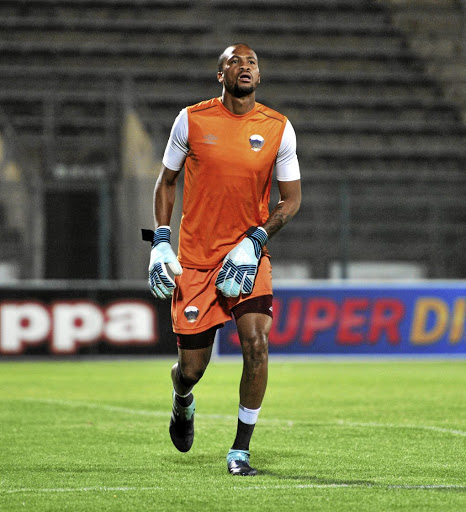 Former Orlando Pirates and Bafana Bafana goalkeeper Brighton Mhlongo has been waging a bitter war against the bottle that almost destroyed his career - and his family.

As a result of his wayward lifestyle, Mhlongo was transferred from the Soweto giants to minnows Chippa United. His wife Dimakatso Mareme read him the riot act.

The talented 26-year-old goalkeeper resolved to get his life back on track. He booked himself into a programme to help him jettison the bottle to save his tottering career and family.

Mhlongo told Sunday World this week that he started weaning himself off the firewaters a few months before he left Pirates to find a home with Chippa in Port Elizabeth .

He poured his heart out about his drinking problems after allegations his marriage was on the rocks surfaced during the festive season.

Sources close to the player alleged that he had separated from his wife for six months due to addiction.

His friends claim that the PSL star would sometimes leave his wife alone at their matrimonial home for days to binge drink with friends.

However, Mhlongo has dismissed these claims, claiming his accusers expected his marriage to fail because of jealousy.

He confirmed he had been on a programme to deal with his drinking problem for more than eight months.

"I didn't go to AA [Alcoholic Anonymous] as it's more of rehabilitation. I knew that I had to see someone before I flushed my career down the drain.

"I took the decision on my own and I have also prayed about it," said Mhlongo.

The goalkeeper said his intention was to limit his drinking, and possibly quit "the unholy waters".

"I wanted to clean up my act and rediscover myself. At the moment I drink occasionally and mostly when we are not playing. I am doing this to save my career."

Phiri happy to be alive after robbery

Speaking about his marriage, Mhlongo said he and his wife were in a good space and there was no such thing as "trouble in paradise" for them.

"I have heard of such a rumour, but that's a lie. I'm surprised that people are spreading such information.

"Despite some few challenges we encounter like most married couples, everything is fine," he said.

Mhlongo added that he had spent the festive season with his wife in Port Elizabeth and Joburg. "My wife has stuck by me throughout including the time when I lost my father and a friend.

"She has always been there for me for more than 10 years."

Mhlongo's wife refused to comment about her husband's drinking problem and wayward behaviour.

Kaizer Chiefs supremo Kaizer Motaung has admitted that the club are disappointed at their two-and-a-half seasons without a trophy‚ and hinted at an ...
Sport
3 years ago

She admitted, though, that their marriage had gone through a strain at some point due to his move from Joburg to the Eastern Cape.

"We were all scared that the move was going to affect our marriage," she said.

"We thought we were not going to make it work. But surprisingly, we found a way to manage the situation."

Mareme said she was also surprised by the information doing the rounds about the collapse of their marriage.

"I respect my husband and what they are saying is very much unlike me. It clearly shows that they don't know me," she added.