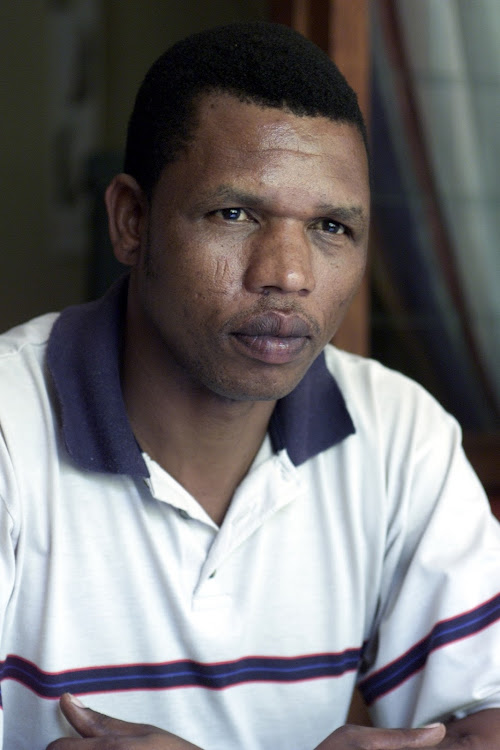 Just moments after being released on parole‚ a convicted hitman with strong links to the ANC and KwaZulu-Natal correctional services bosses was escorted to the beach for a cleansing ritual by prison guards‚ before being driven to a brand-new home in Pietermaritzburg.

Controversial inmate Russell Ngubo - who continuously received preferential treatment from prison guards‚ and was accused of assaulting warders at least twice - was released from the Durban Westville Prison on Monday‚ after serving 12 years behind bars for two murders committed in 1995.

Ngubo‚ former ANC branch chairperson and erstwhile New Prison deputy director‚ was convicted in 2005 for the murders of IFP leader Nash Ngubane‚ in Impendle‚ in 1995‚ and IFP supporter Amon Mshengu in the same year.

But before he was officially released‚ Ngubo demanded to be taken to the ocean to cleanse himself of bad luck associated with a stay in jail. The man‚ nicknamed Blanket‚ reportedly shares a close relationship with KZN prisons boss Mnikelwa Nxele. Their relationship dates back to a dark‚ violent period in the KZN town of Richmond in the early 1990s.

“He was accompanied by members of the EST [Emergency Support Team] on Monday around 9am to dip in the sea. He was then driven back to the office to finalise paperwork before being driven to his newly-built Pietermaritzburg house. This is where his eldest wife was already waiting for him. However‚ he asked…for permission to spend the night at his traditional home in Impendle to do rituals‚” a prison warder told TimesLIVE.

Two other sources verified the information. None of the officials would go on the record over fears that they would lose their jobs.

Brickz sentenced to 15 years in prison

Popular musician, Brickz has been sentenced to 15 years in prison.The popular musician was found guilty of raping a 17-year-old at his home in 2013 ...
News
4 years ago

The Sunday Times confirmed via the Mkhonto weSizwe Military Veterans Association that the house was built by the organisation‚ using unspecified donations‚ on land given over by the Msundusi Municipality.

Ngubo's wife‚ who identified herself as MaZuma‚ and who was at the new home in Pelham‚ confirmed that he had gone to Impendle. She would not give reporters her husband's contact number. She confirmed‚ however‚ that the house was only completed in October.

The Sunday Times reported this weekend that the convicted hitman was planned to be part of the ANC KZN's security detail for the party's national elective conference - only to be scuppered by parole conditions that do not allow him to leave the Pietermaritzburg magisterial district.

An ANC comrade said the party would never dump Ngubo because he was a “special cadre”.

“If you are not in the ANC and know nothing about his struggle credentials in the KwaZulu-Natal Midlands you will never understand the complexities around Blanket‚” he said.

Walking into the interview room at Tiso Blackstar offices‚ Jub Jub wore dark shades and spoke quietly on his phone. Having watched most of his other ...
Entertainment
3 years ago

This was not the only time Ngubo received special treatment from correctional services - with the department unable to explain why the convicted killer enjoyed a lavish lifestyle‚ preferential treatment and political protection while serving life behind bars.

“In front of Ngubo‚ every warder knew their place. Everyone knew he was a special inmate. I really do not know why. In fact he was like a warder and we were prisoners. If he wants something you jump‚ no questions asked‚” said a senior prison warder at Pietermaritzburg's Sevontein Prison‚ were Ngubo had a stint in 2013.

In 2013 Ngubo was transferred to the medium-security Sevontein Prison from Westville Prison amid allegations that he had been terrorising the warders. He was since moved back to Westville. Another well-placed source within Westville Prison‚ who spoke to the Sunday Times on condition of anonymity‚ said that Ngubo had enjoyed a lavish existence behind bars – with all the trappings of the outside world.

The source said that he was cloistered away in the hospital section of Westville prison in a private room‚ away from the squalid and overcrowded communal cells.

“He was getting special treatment…in the hospital section of Medium B where it is easy for the most hardened criminals‚” the source said. “He hardly eats the prison food and warders bring him food [from outside].”

Ngubo seems to have had his release expedited‚ jumping the queue in front of thousands of other lifers who are eligible to be paroled.

“There are crooks that went in before him but there is no parole for them. You see how easy it was for him‚” the warder said.

His cushy release came as a group of “lifers”‚ men incarcerated but now in line to be paroled‚ took their fight for freedom to the Durban High Court. And while Ngubo’s return to society was seamless‚ the men still shuttered away behind bars accused the Minister of Correctional Services in court papers of bungling on an industrial scale.

Prisoner Nkosinathi Ntenza‚ who deposed to an affidavit which formed the basis of their application‚ said that all the men involved in the court bid had served an appropriate portion of their sentence which made them eligible for parole.

KwaZulu-Natal Correctional Services spokesman Thulani Mdluli said Ngubo has been released as a high risk‚ maximum category parolee‚ and would be kept under house arrest. He added‚ however‚ that these conditions could be relaxed to take into account personal circumstances.

“The KwaZulu-Natal Department of Correctional Services wants to confirm that‚ according to all relevant reports from social workers and psychologists‚ Ngubo has undertaken all necessary rehabilitation programmes. In addition to the reports‚ the families of the victims were consulted for mediation and they were positive‚” added Mdluli.