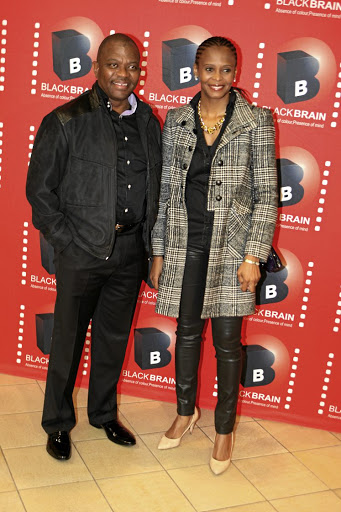 Moss Mashishi and wife Tsholo had a close encounter with car jackers who drove off in the couple's Range Rover Sport SUV. / Mabuti Kali

Top advertising agency Ogilvy SA chairman and businessman Moss Mashishi is one of Mzansi's celebs who can't wait to see the back of 2017 after having a horrible start to the year.

This after the businessman and his wife Tsholo were hijacked of their bling Range Rover Sport while entering Letamo Game Reserve in Krugersdorp on the West Rand for a friend's birthday party in March.

While the couple escaped unscathed when tsotsis pounced on them at the entrance of the property, he was also robbed of his expensive Rolex wrist watch.

This news came to the fore this week after the police's vehicle theft unit noticed an upswing in the hijacking of luxury SUVs, such as Mashishi's wheels, that are then spirited across the border to countries like Zimbabwe, Mozambique or DR Congo.

According to a police statement seen by Sunday World, Mashishi and his wife were left shaken when a group of men in a BMW X5 surprised them while signing in at the entrance of the game reserve .

Mashishi told police that at the main gate, he was approached by the security guard with a clipboard in his hand.

The gang of armed men who attempted to hijack Rhythm City actor Dumi Masilela in Tembisa last month had seemingly been on a crime spree that evening‚ ...
News
3 years ago

"Within a few minutes, the complainant alleged that a metallic blue BMW X5 with three male occupants pulled up behind him, to which he assumed it was guests attending the same event.

"An African male, with lower face covered with a cloth from the nose, approached the complainant and pointed [at] him with a firearm, instructing him to get out of the vehicle" reads the statement.

"He was told to remove his wrist watch [Rolex blue face], and hand over his wallet. Another armed male, meanwhile, ordered his wife to alight from the vehicle," Mashishi said in the statement.

Naledi Shange This startling information was contained in the written confession of Sifundo Nkosi‚ who was applying for bail in the Benoni ...
News
3 years ago

He further stated that the BMW reversed and made a U-turn while the two men got into his Range Rover and sped off with his wallet, driver's licence, iPhone 7, gym bag, his wife's leather jacket and silver and gold belt still in the car. He said all items were valued at R1.5-million.

Krugersdorp police spokeswoman Tshepiso Mashele confirmed that a car hijacking case was being investigated but no arrests had been made.

It's been three months since actress‚ Simphiwe Ngema's husband‚ Dumi Masilela was killed in an attempted hijacking and the widow is still trying to ...
Entertainment
3 years ago
Next Article