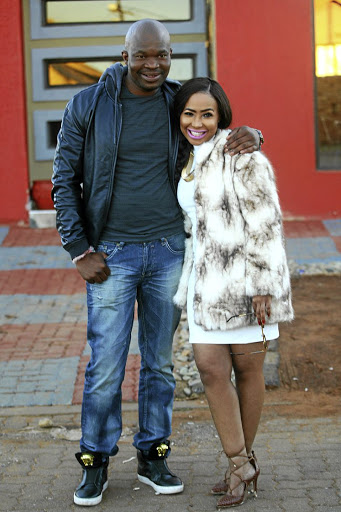 Thuthukani Mvula and singer Mshoza say they're happy even though they are facing court action from his estranged wife, Duduzile. / Veli Nhlapo

Kwaito star Mshoza and her new husband, Thuthukani Mvula, are preparing for a big legal showdown with the tycoon's estranged wife, Duduzile Mvula.

Duduzile, Thuthukani's legal wife, has instructed her lawyers to serve her hubby with a summons to annul his marriage to the songbird. She says that Thuthukani committed bigamy when he married Mshoza without divorcing her or obtaining her permission to take a second wife.

Duduzile also instructed her lawyer to file for divorce and demanded half of their lucrative estate that allegedly includes several properties and a fleet of luxury cars.

Thuthukani said he would fight her in court because he didn't break the law.

"She left me five years ago, so what was I supposed to do because I'm a man? I even spoke to her father who said he didn't know where she was living. She also refused to sign the divorce papers my lawyers sent to her."

Thuthukani put his feelings on the line: "I don't love that woman anymore and I don't care where she lives. Whether she lives on the streets or in a shack is none of my business. But I'm looking after her, even the BMW she drives was bought by me," he said.

'It's different this time' - Mshoza on traditional wedding

Mshoza is enjoying newly-wedded bliss and everything that comes with being a new makoti (bride) after she traditionally tied the knot to her beau ...
Lifestyle
4 years ago

Mshoza got hot under the collar when we contacted her for comment.

"Yes, my husband told me that that woman left him a long time ago, but she is refusing to sign divorce papers. I didn't marry him for money. The BMW X6 that I'm driving is mine. I bought it with my own money because I have a trucking business and, as a musician, I get gigs. If she wants to go to court she can go, but my husband and I are happy together," she said.

News of Mshoza's legal battle was revealed by two credible sources - the couple's relative and an acquaintance - who didn't want to be named. The friend said Duduzile and Thuthukani married in 2008 and separated in 2011, after she complained that he was not sleeping at home.

The friend added that Duduzile got the shock of her life when she read that Thuthukani had paid lobola for Mshoza.

Mshoza to her man: 'I love the way you love and respect me'

It’s no secret that songstress Mshoza has been through the most when it comes to relationships‚ however she has buried all of that safely in the ...
Shwashwi
4 years ago

"She tried to contact him in a bid to resolve their issues, but stopped after he ignored her phone calls. Since then, she has been expecting him to serve her with divorce papers, but he never did. She got to know of Mshoza through newspapers articles and the pictures Mshoza posted on social media."

The acquaintance said Thuthukani will be slapped with the summons tomorrow.

"She wants the marriage between him and Mshoza annulled. She also wants a divorce and 50% of their assets as she doesn't believe in polygamy. It's sad because this woman met this guy when they were students at university, when he had no money. Now he has money and he rolls with Mshoza. It's unfair," she said.

The aggrieved wife declined to comment and referred us to her lawyer, Zinhle Tenza, of Tenza-Tondi Inc, who confirmed that she was representing Duduzile.