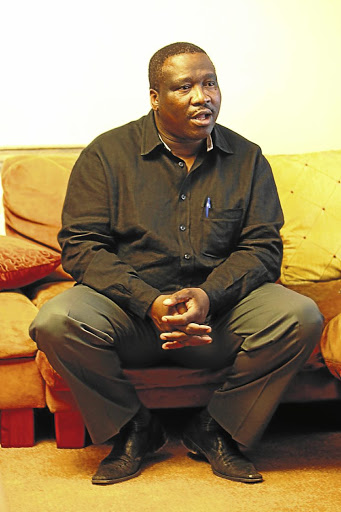 Lesedi FM presenter Thuso Motaung is planning to lay criminal charges against those behind the 'fake pregnancy' allegations./ Mabuti Kali

Motaung revealed that he has already uncovered the person behind the misinformation about his family, and said he plans to institute criminal proceedings against the person.

He said the allegations have shocked him and "reminded me that black people are capable of evil deeds against their fellow black people".

"I'm hurt by the information and I fear that the allegations are likely to affect my children because they are currently writing exams. This is just proof that black people are cruel," Motaung said.

The outspoken Makgulong A Matala and Jwale Ke Nako presenter said the incident has reminded him about a book he is currently reading, titled What's Wrong About Being Black. He said the allegations were peddled by people who are jealous about his achievements.

"If you are not an achiever as a black person, people say you are nothing. But they will attack you when you do something they are not [capable of] doing. They are kicking me because I'm not a dead dog, I'm a moving dog. That's why people are spreading lies about me and my family."

After almost a decade of marriage, singer Zwai Bala and his radio presenter wife Melanie Bala are calling it quits.The couple had been married since ...
News
3 years ago

A teacher by profession, Motaung said he had initially planned to launch a defamation lawsuit against the man who was spreading the information about him, but indicated that he has since changed his mind after discovering that the man had nothing to his name.

"He is not even working and wears plastic shoes. I'm just going to open a criminal case against him to make sure that he pays for what he has done to me and my wife."

"This is fake news designed to assassinate the character of the provincial chair. That is why we have reported this matter to our intelligence unit to investigate and expose the culprit. We are also happy that the parties affected by this matter have also instituted criminal investigations," he said.