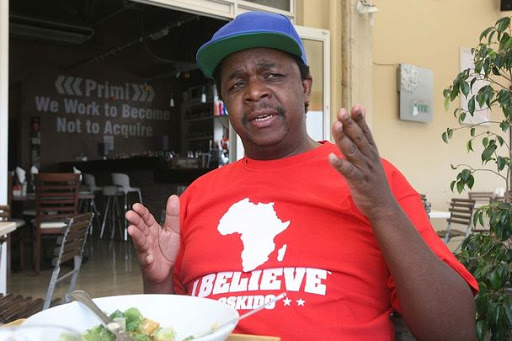 Afro-pop singer Tina Dlangwana says house music legend Oskido wants her love again but he is "puke that I would never swallow back".

Rumour is that Tina snubbed Oskido's invite to pay him a visit at his new Centurion pad after he fled his mansion in a Midrand security estate following a fight with a girlfriend.

Oskido expressed shock at Tina's claims. He said he would never rekindle his dalliance with the artist because he has moved on and is in a different space.

He also charged that Tina has a screw loose.

The Kawalawa Jazzmee boss hinted that he was happy with his life and better off without the songbird.

"My life is clean. I really don't want to be in that space. I'm in another space," he said.

Tina confirmed the startling tidbits when we approached her after we learnt from our deep throat that Oskido wanted to worm his way back into her panties.

Tina, who married the late Prosper Mkwaiwa after breaking up with Oskido, said she was at an event in Orlando recently when she bumped into the house music fiend.

She said during the conversation Oskido told her that he had moved into a new place in Centurion after fighting with his girlfriend and asked her if he could drink from her lips again.

"I told him that's never gonna happen because I don't date people that I dated before. He is like puke that I won't swallow back. He told me that he lives in Centurion because he has moved out of the only house he built in Carswald.

"I was like 'where do I get in there?'.It's never gonna happen," she said.

Oskido confirmed that he met Tina at the event when he was backstage preparing to perform.

"She approached me and greeted me and I greeted her back because I didn't want to be negative towards her.

"I then left the venue immediately after my performance.

"I have no time. My life is starting to be at another level. I'm at peace with myself.

"I think I will be even scared to greet her in the future," he said.

In a written statement, Oskido said Tina has gone through a lot and needs prayers.

"After not seeing and talking to her for almost six years, I bumped into her backstage and I greeted her and we spoke briefly.

"This woman has gone through a lot in life and all she needs is prayers. And this is a typically Tina stance, running to the media to create controversy and looking for attention. I therefore cannot comment on nonsense, my brother."

Tina and Oskido broke up about seven years ago after she complained that he beat her up in Midrand.