ANC must rid itself of ‘mercenaries’ using party for personal gain: Mbeki 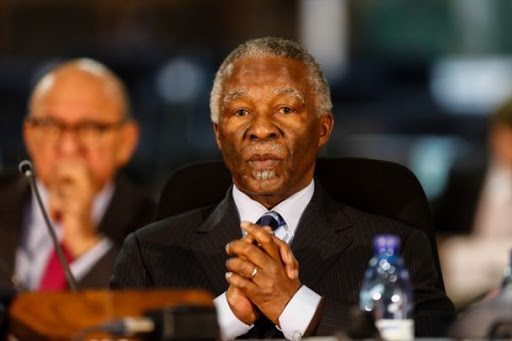 The historic value system of the ANC serving the people with honesty‚ sacrifice and selflessness has been replaced by a rapacious and predatory value system.

Former president Thabo Mbeki said this at the OR Tambo Memorial Lecture at Wits University on Friday night.

Tambo‚ the longest-serving ANC leader who died in 1993‚ would have been 100 on Friday.

Mbeki said since the ANC acquired political power in 1994‚ there had been members of the party who saw the ANC as a stepladder to use for self-enrichment.

“These are card-carrying members of the ANC who have repudiated the ANC value system. The ANC recognised this as early as 1994.”

Mbeki said former president Nelson Mandela‚ in an address to the ANC in 1997‚ recognised a number of negative factors that had emerged in the organisation‚ including “careerism within our ranks“.

Mandela also said these people worked to manipulate the movement for their personal interests.

Mbeki also said ANC secretary-general Gwede Mantashe had declared in a diagnostic organisational report three months ago that “ANC members fight for deployment as if there is no tomorrow“.

During the last two decades‚ the ANC had failed to purge itself of these mercenaries‚ Mbeki said.

“What was seen to be abnormal 20 years ago is a norm in 2017. The historic value system has been so corrupted that its replacement has become the norm within the organisation.”

There was an ascendance of negative elements that Mandela had called on the organisation to purge‚ Mbeki said.

Mbeki said the ANC had required its members to serve the people not for personal gain.

At the ANC conference in Mahikeng in 1997‚ the ANC resolved that there was no requirement that the ANC chairman in the province should become the premier in that province.

Mbeki said in the build-up to the ANC Polokwane conference in 2007‚ there were concerns from some that this arrangement of a chairman not being required to be premier resulted in two centres of power.

He said the 1997 resolution was replaced in 2007 with the one which said the provincial chairman of the ANC should be premier.

“It meant the occupation of positions in the ANC was a guaranteed route to state power. This is what the movement sought to discourage among the membership‚” Mbeki said.

This had resulted in corruption‚ weakening of the democratic institutions‚ state capture and virtual abandonment of the historical Pan Africanist perspective of the ANC.

“Those who remain genuine members of the ANC ... should take the necessary steps to change the self-destructive course that the ANC has embarked upon.”

This course had manifested itself in the ANC losing support in the elections from 2009 to date.

Mbeki said as a first step‚ members must genuinely accept that the movement was immersed in a deep crisis.

They should then proceed to characterise the source and the nature of the problem.

Mbeki said they should then implement what Mandela said in 1997: They should take necessary steps to purge themselves of corrupt members and organise themselves in a way that would make it difficult for corrupt elements to be part of the movement.

Mbeki said the best way to honour Tambo would be to live up to the example he set‚ which included being loyal to the truth and value system of the ANC.

Mbeki also said Tambo had been essential in ensuring that the ANC remained strong from 1940‚ through its banning in 1960 and through its exile period.