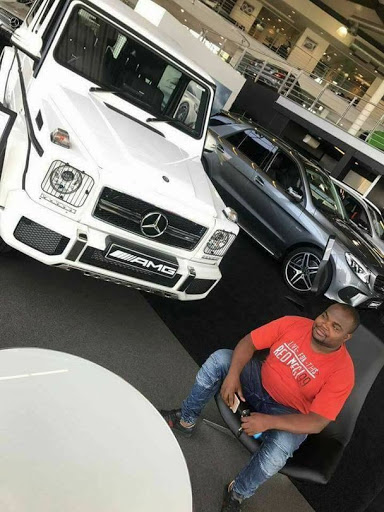 While the debate over fake hair pieces for women rages on, one man is reaping the benefits and has millions of bucks to show for it.

Using profits from his business, he acquired a sleek Mercedes Benz G3, paying R2.7-million for a premium model.

Mochekgechekge, 27, owns a string of salons and outlets around the country through his company Sky Diva, distributing the controversial fake hair.

The most expensive weaves he sells are 30-inch Peruvian and Brazilian pieces which cost R3800, and an additional R350 if you want "installation".

After taking delivery of his G-Wagen, he took to Facebook to brag about his new "baby".

"I don't sell cars guys, I sell hair; stop asking me where is my Golf," he said in a post showing both his new and old car, a red VW Golf GTi. In another post, he asked: "Who said hair doesn't have future?"

He told Sunday World that he bought the luxury car because he wanted to look the part when he is among other business people.

To own an entry level G-Wagen model, a G350d standard, you would have to part ways with at least R1.6-million.

According to Mercedes-Benz SA, the most pricey model and more popular with customers is Mochekgechekge's AMG G63, which sells for R2.4-million for a standard issue.

Spokeswoman Shirle Greig said if a customer added an assortment of extras, the price could easily escalate to R3-million. She cited the rear seat entertainment centre which includes a screen, DVD player and headphones, costing an extra R33000.

Greig said all manner of South Africans had been lapping up the car since it was launched with its current look.

The latest version of this traditional off-road and military car has been a huge success for the German carmaker as it is seen more as a fashionable everyday city SUV than a purpose-built utility car.

Its popularity has led to an increase in production, with the Austria plant producing 20000 G-Wagens last year for the global market. The company said it was the highest production volume for the vehicle.

Local celebrities who own these machines include DJ Black Coffee and chereographer Somizi Mhlongo.