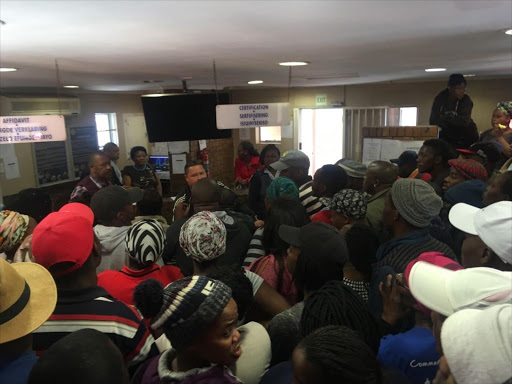 Vigilantes are believed to be behind the 11 killings that rocked a Cape Town community on Friday night.

Police said they were investigating whether the killings in Marikana‚ east of Cape Town International Airport‚ were linked to seven murders— also being treated as the work of vigilantes — on Tuesday.

“Manci has vast years of experience and previously worked in Nyanga as a station commissioner. He will be supported by a team comprising specialist detectives‚ intelligence operatives and high risk units such as Tactical Response Team members‚ National Intervention Unit and other forces‚” said police spokesman Brigadier Novela Potelwa.

Police minister Fikile Mbalula said he supported the appointment of Manci‚ who had “vast” experience.

“I am equally pleased that [Manci] will be supported by a team‚ comprising specialist detectives‚ intelligence operatives and high risk unites such as Tactical Response Team members‚ and the National Intervention Unit (NIU). These deployments vindicate us that we were correct to relaunch the TRT‚” Mbalula added.

“These kind of attacks to our people can’t continue and police are expected to fold arms and do nothing. Police are mandated to respond and they will respond in defence of our people and stability of democracy.

“Police are mandated by the constitution to ensure safety and security of all persons and property in the national territory. I therefore expect police to adhere to this mandate and find these murderers. Our people can’t live in fear. Our kids deserve to grow in a non-violent society.”

Friday’s killings happened in at least three locations in Marikana‚ where about 60‚000 people have set up home after land invasions that began in 2013.

Marikana residents have claimed recently that police have failed to protect them from criminals‚ leaving them with no choice but to take matters into their own hands‚ and Nyanga Community Policing Forum chairman Martin Makasi said he feared Friday’s shootings were in revenge for those on Tuesday.

“Vigilantism can escalate the problem‚” he said‚ because the relatives and friends of those who were targeted “will want to come and fight”.

Pat Lekker‚ the ANC community safety spokesman in the Western Cape‚ said on Saturday: “The ANC calls on calm in the community to allow the law to take its course and expresses condolences to all families who lost loved ones.”

Lekker visited the shooting scenes shortly after the killings‚ consoled family members and encouraged the community to cooperate with investigators.

ANC national spokesman Zizi Kodwa said: “The ANC calls on the community of Marikana‚ Philippi‚ Nyanga and anyone else to come forward with any information they may have to assist the SAPS apprehend the perpetrators of these heinous crimes.

“Criminals live amongst our communities‚ they are harbored by us‚ and until society stands as one against this scourge it will not be defeated.”

Responding to a tweet from Zwelinzima Vavi‚ former general secretary of the Congress of South African Trade Unions — who called Marikana “a living hell” — Western Cape Premier Helen Zille said she “wanted solutions” for violence on the Cape Flats.

“Provincial government has no operational control over SAPS‚” she tweeted‚ referring to long-standing criticism from Democratic Alliance politican’s in the DA-controlled City of Cape Town and Western Cape that police are chronically understaffed on the Cape Flats.