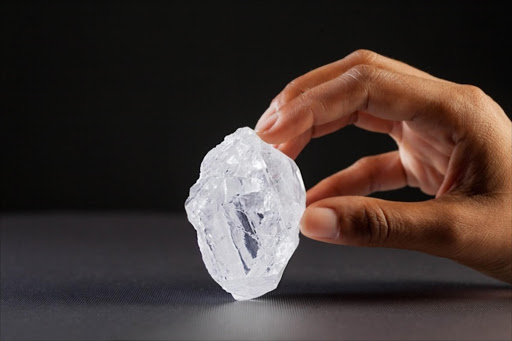 The world’s second-largest rough diamond has been sold for $53m to Graff Diamonds‚ the company that bought a large chunk of the diamond that had broken off.

The tennis ball-sized 1‚109-carat Lesedi La Rona was found by Lucara Diamond Corp at its mine in Botswana.

Graff bought the 373.7-carat rough diamond that had broken off the Lesedi La Rona when it was mined by Canada’s Lucara at its Karowe mine‚ which it bought for a song from De Beers. Graff is now the owner of the world’s second-largest diamond‚ which it will study carefully to determine how best to cut it and polish it into finished diamonds.

“The stone will tell us its story‚ it will dictate how it wants to be cut‚ and we will take the utmost care to respect its exceptional properties‚” said Laurence Graff‚ founder of the company.

The $53m Lucara realised for the Lesedi La Rona is a far cry from the $70m reserve price it set for the diamond at a Sotheby’s auction in June 2017‚ but Lucara CEO William Lamb said the price was better than the highest bid received at the auction.

Lucara found the diamond in November 2015 but struggled to find a buyer for the stone‚ considered by some to be almost too large for sale because there is no equipment in the cutting and polishing industry to assess a gem that size.

“We took our time to find a buyer who would take the diamond through its next stage of evolution‚” Lamb said.

The Botswana government this month proposed an amendment to its Precious and Semi-Precious Stones Act to give the government of one of the world’s largest diamond-producing countries the right to buy diamonds that are unusually large or have unusual features.

Lucara‚ which regularly produces large diamonds from Karowe‚ said the bill would not negatively affect the company because both parties in the transaction would agree the price of such diamonds based on market prices.

The world’s largest rough diamond was the 3‚107-carat Cullinan diamond found near Pretoria in 1905. The diamond was cut into various polished diamonds‚ which are owned by the British monarchy.

Petra Diamonds‚ a London-listed company‚ has just developed a fresh underground mining area at the Cullinan mine that yielded the diamond and CEO Johan Dippenaar has spoken of the company’s hopes to discover another giant diamond‚ with its new processing plant designed to not damage very large diamonds.