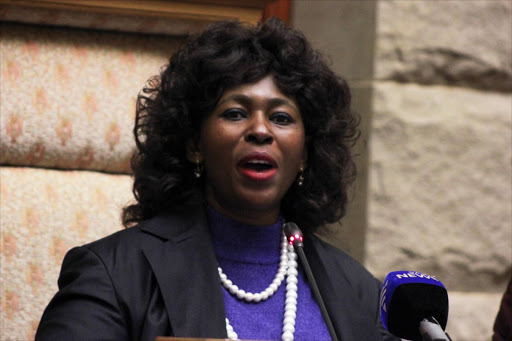 She equated her resignation from the party at the historic Liliesleaf Farm in Johannesburg on Thursday to a divorce‚ saying she had spent more time in the organisation than with her biological parents.

Asked by Morning Live presenter Leanne Manas when the ANC would act against corrupt members‚ Kodwa said that the “KPMG saga” meant that there could be “no suggestion” that the leaked e-mails from the controversial Gupta family were “false or fake news”.

Khoza said she was “demoted upwards” from her position as chairperson of the KZN legislature’s standing committee on public accounts (Scopa) after she called on former ANC regional treasurer Alpha Shelembe to resign from his position as Pietermaritzburg deputy mayor.

Shelembe has been implicated in an arson attack on the ANC’s regional headquarters in Pietermaritzburg and also stands accused of corruption‚ fraud‚ and money laundering.

“Where is Shelembe today? He is in the legislature in KZN‚ the ANC is not serious about dealing with corruption‚” she said.

“Even now I’m being punished because of the role I played during the SABC hearing and because many comrades were not happy with me and‚ by the way‚ on the day I was told I’m now being removed as the chairperson of the public service and administration committee‚ it was because I was going to hold Faith Muthambi accountable for using state resources to fly her family‚ to put them in hotels. She used over R500‚000‚” said Khoza.

She said that her resolve to fight corruption was also the reason that Hlaudi Motsoeneng was no longer an SABC boss and that she had no regrets.

She said that she would go back to the ANC if they charged “comrade Jacob Zuma”‚ saying she would help them formulate charges against the president.

She denied speculation that she would join the DA.

“I have no business with going to the DA. I believe the DA protects their white minority interests on the whole. Even though they are trying to be inclusive‚ the truth is that historically that’s what they’ve been doing‚” said Khoza.

But Kodwa denied that they had received her resignation‚ saying she did not follow proper procedure.

She responded by calling Kodwa a “pathological liar”.

“Comrade Zizi‚ I am just sad to say‚ I think you are a pathological liar and I don’t think you love truth‚ I think you feel uncomfortable with truth‚” said Khoza.

“My ward 8 branch is not functional‚ who do I resign to? My (branch) chairperson who is out on bail because he has been found with an arms cache?” said Khoza.

She said she believed that “Africans are not yet liberated”.