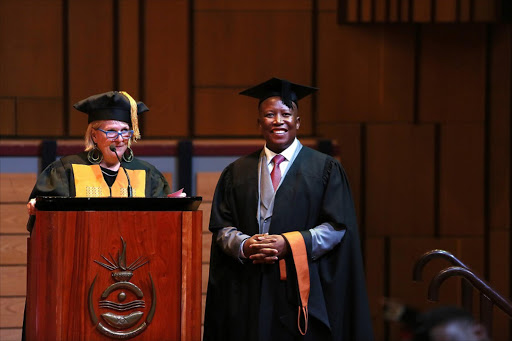 This time, Malema will graduate with a BA-Honours in Philosophy, on Wednesday.

It has been less than two years since Malema obtained his BA Degree in Political Leadership and Citizenship. He is now going back to the Unisa main campus where his honours will be conferred.

“The University congratulates our entire graduate including Mr Malema for being able to complete all his studies under such difficult environment as a leader of a political party. We wish him the best and hope he will continue with his educations by doing so to encourage young people to take education serious in order to uplift their life’s” said Prof Mandla Makhanya, Unisa Principal and Vice Chancellor.

EFF's spokesperson Mbuyiseni Ndlozi also completed his Doctorate of Philosophy in Philosophy at University of Witwatersrand .