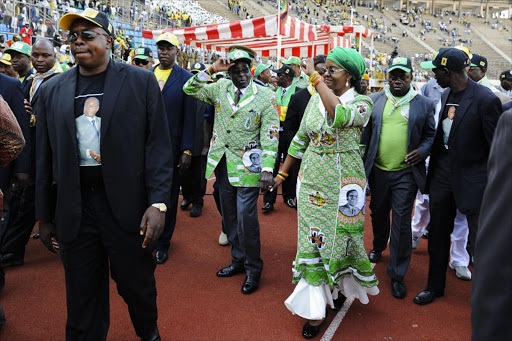 A waitress suffered a miscarriage after she was pushed by Robert Mugabe jnr as he fled his mother Grace Mugabe’s violent attack at a Sandton hotel on Sunday‚ the Sunday Times said.

It reported that the waitress at Capital 20 West was delivering food when Robert jnr ran past her and pushed her out of the way. The woman fell to the ground and was rushed to hospital‚ where she later lost her baby.

A hotel employee confirmed the incident‚ it said.

“She was not hit by Grace. It was Robert jnr who pushed her out of the way as he ran away from his mother.

“Grace did hit staff members ... She was hitting everyone — her sons‚ their friends‚ the girls and staff members‚” the employee told the Sunday Times.

The report comes amid the news that President Robert Mugabe flew back to Zimbabwe in the early hours of Sunday accompanied by his wife Grace‚ according to the Zimbabwe Broadcasting Corporation.