Will our new mayors downgrade to wheels with less bling? 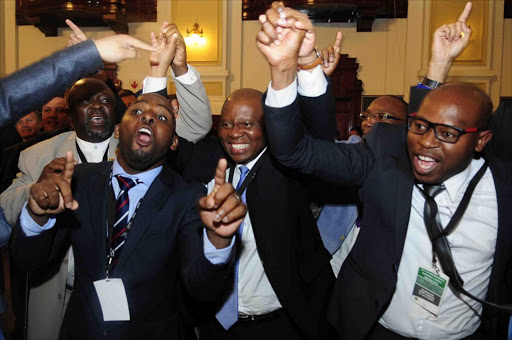 Herman Mashaba celebrating his victory after being elected as the new mayor of Johannesburg. Photo Thulani Mbele

Leather upholstery‚ elegant finishes‚ climate control and a state-of-the-art sound system married to a powerful high-performance engine in a luxury sedan – or an eco-friendly hatchback?

That’s the choice facing the newly elected mayors of Tshwane‚ Johannesburg and Nelson Mandela Bay as they ponder abandoning the luxury vehicles used by their predecessors in favour of something with less bling‚ as driven by their counterpart in Cape Town.

Former executive mayor of Johannesburg Parks Tau enjoyed the use of a BMW 5 Series – which at current prices carry price tags ranging from R652 000 to more than R1 million.

Kgosientso Ramokgopa used a BMW Gran Turismo to navigate the streets of the country’s capital‚ Tshwane. It is described by the manufacturer as a luxury vehicle that “combines a powerful sporting character with inspiring size”.

Nelson Mandela Bay’s former mayor Danny Jordaan used a 2016 Audi A6‚ “courtesy of Volkswagen at no cost“‚ according to municipal spokesman Kupido Baron. These vehicles currently cost roughly R662 000 for the 1.8 litre model to R822500 for the 2 litre version.

Democratic Alliance mayor Athol Trollip vowed after being sworn in that the days of flashy cars in the metro were over.

“Corruption is the enemy of freedom and fairness and the thief of opportunity‚” he said. “There will be no more erosion of municipal resources due to corruption procurement practices. There will be no more wasting of our resources on the glitz and glamour of irrelevant public events‚ flashy cars and wasteful expenditure on cadre deployment.”

While it remains to be seen whether the mayoral cars in Tshwane‚ Johannesburg and Nelson Mandela Bay are downgraded to something more modest‚ Cape Town mayor Patricia de Lille is leading by example‚ being chauffeured about the city in a hybrid Toyota Prius.

Helen Zille‚ her predecessor‚ also used a Toyota Prius – which retails for R446 400.

De Lille’s spokesman Zara Nicholson said that both of the hybrid vehicles now formed part of the city’s pool vehicles that are used to transport mayoral committee members.

“There is a pool of seven vehicles that are used to escort the mayor‚ deputy mayor‚ speaker‚ chief whip and MAYCO members when they need to attend meetings or events. The fleet includes four BMWs‚ two Toyota Prius and a Toyota Fortuner. The city also makes use of hired vehicles when needed‚” she said.

“Blue light brigades are not allowed in the city of Cape Town government. The mayor decided that this was not necessary‚” she said.

Newly elected speaker of the city of Joburg‚ Vasco Da Gama‚ said that the SAPS protection unit determined what vehicle was used by the mayor. “It is not the function of the mayor to decide‚” said Da Gama.

Out-going city manager of Tshwane‚ Jason Ngubeni‚ revealed during the election of Solly Msimanga that national legislation provided that a municipal council could make a municipal-owned vehicle available to an executive mayor for use on official purposes.

The handbook of members of the executive and presiding officers‚ says that‚ “State-owned official vehicles and SAPS VIP drivers and protectors‚ may be allocated to members and are made available for official purposes and in the interest of security”.

“The accommodation of executive mayors will be on the level of ministerial standard.”

The Metro Police VIP protection unit provides both the driver and a protector for the mayor of Tshwane.