Mugabe takes a tumble once again 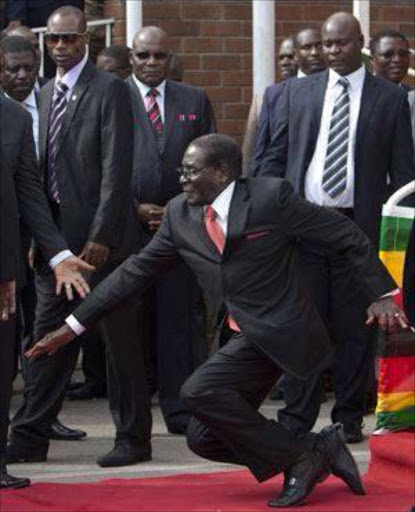 Ten months after the #MugabeFalls debacle, the Zimbabwe leader has again taken a little tumble in public, this time in New Delhi.

Footage posted by Indian digital media company Newzstreet TV on Thursday shows President Robert Mugabe, 91, losing his footing as he walks up to a dais where Indian premier Narendra Modi is waiting.

Arms outstretched, Modi moves over to him, helping to break his fall. Two aides also rush to help from behind.

Mugabe is attending the India-Africa Forum Summit along with other African leaders.

Modi and Mugabe shake hands and then the Indian premier gently guides Mugabe off the podium.

"While descending the podium Modi ensured that the leader stepped down safely," the Newzstreet TV reporter says.

Mugabe slipped on the red carpet when returning from an African Union summit in Ethiopia in February, prompting a rash of internet memes under the hashtag #MugabeFalls.

Officials insisted he had in fact broken his fall, but since then aides have noticeably hovered more closely round the Zimbabwe president's elbow.

He has been in power in Zimbabwe since 1980, insisting in 2012 that he was as "fit as a fiddle". The opposition says that is not true.

Journalist @LanceGuma tweeted: "Zanu PF shud do decent thing now. This business of having a 91-year-old president sleeping and falling all over is embarrassing #MugabeFalls"