Zonke gives back to the children 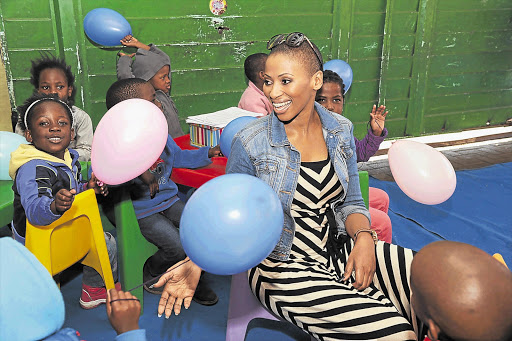 AWARD-WINNING artist and producer Zonke Dikana has proved that you don' t need to be a millionaire to give to the less fortunate.

AWARD-WINNING artist and producer Zonke Dikana has proved that you don' t need to be a millionaire to give to the less fortunate.

There were tears of joy as Dikana surprised the Thuthuzela Aid Community Care Centre in Alexandra, Joburg, with a R50000 cheque as part of her Mandela Day contribution.

The home takes care of 60 HIV-positive abandoned and abused children.

All the money, said the Feelings hitmaker, came from her own pocket.

"This home touched my heart when I first came here last year and I have been working with them ever since. I am giving my own money because you don't have to be wealthy to give, you give what you have," said Dikana.

She said she chose this home because she didn't want to follow the trend of celebrities all gravitating towards the same "well-known" charities.

"Some of the charities are forgotten, so I wanted to find one that is not known and quietly be a part of it," said Dikana.

The newly announced X Factor South Africa judge said she had always wanted to be part of a children's charity because she is a mother and loves children.

"I see my own children in these children's eyes; I see myself as a child in them, so I can't help but fall in love with them."

Elizabeth Monyelwa, one the home's directors, cried at the gesture.

"I just thought Zonke was here to play with the children as she usually does. I had no idea she was bringing us such a big surprise. This money will help us a lot in continuing our work with the children and getting our new building going," she said.