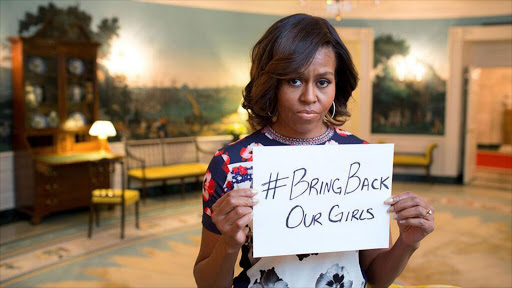 US First Lady Michelle Obama denounced as an "unconscionable act" the kidnapping of more than 200 Nigerian schoolgirls by Islamic militants as a mobilised international community helped with the search effort.

For the first time standing in for President Barack Obama on his weekly Saturday morning address, she said they were both "outraged and heartbroken" over the mass abduction from a school dormitory in a remote corner of northern Nigeria last month.

Their sentiments were shared by "millions of people across the globe," she said.

This violence "was not an isolated incident... it's a story we see every day as girls around the world risk their lives to pursue their ambitions," Michelle Obama said.

"This unconscionable act was committed by a terrorist group determined to keep these girls from getting an education - grown men attempting to snuff out the aspirations of young girls."

On April 14, 276 schoolgirls were abducted in the northeastern Nigerian town of Chibok, with eight more seized from Warabe on May 5. Three weeks later 223 girls are still missing.

The Islamist militant group Boko Haram claimed responsibility, and threatened to "sell" the girls into slavery.

The abductions have sparked offers of help from the United States, France, Britain and China.

Seven military officials from the US Africa regional command AFRICOM along with a State Department expert arrived in Nigeria on Friday. Seven more, including FBI personnel, were expected on Saturday.

Among the help on offer would be intelligence-sharing as the teams work to track down the girls, who range in age from 16 to 18.

Sources close to French President Francois Hollande told AFP on Saturday that the French team of experts were now on the ground.

"The French mission including experts, human and technical information specialists as well as observation and image analysis equipment arrived in Nigeria today," said the source. "If necessary we will reinforce it."

Britain said Wednesday it would send a small team to Nigeria to concentrate on planning, coordination and advice to local authorities rather than operations on the ground to look for the girls.

China has promised to supply "any useful information acquired by its satellites and intelligence services" to Nigeria.

Nigerian President Goodluck Jonathan, whose long silence after the abductions was sharply criticised, said Friday that a search team was already at work in Sambisa forest, near Chibok, with remote sensors trying to locate the kidnappers and their victims.

The United States and officials in Chibok voiced concern that the girls might have been moved to neighbouring Chad and Cameroon to be sold.

But Jonathan said Friday that he believes the girls were still in Nigeria, possibly in the Sambisa forest.

The abductions have also led to a growing social media campaign with the hashtag #BringBackOurGirls joined by public figures and celebrities.

The Financial Times on Saturday published an open letter signed by 50 leading personalities, including former world leaders as well as the singer Bono, Bill and Melinda Gates and Nobel Peace Prize laureate Muhammad Yunus who have called on the international community to do everything to ensure the return of the pupils.

"We urge all local, national and regional governments, with the full support of the international community, to dedicate their expertise and resources ...to #BringBackOurGirls," it read.

The UN Security Council said Friday the mass kidnappings "may amount to crimes against humanity" under international law, but made no explicit reference to charges in the International Criminal Court.

The 15 members of the council said they would follow the situation and consider "appropriate measures" to take against Boko Haram.

The statement urged their immediate release, without conditions.

The Dutch foreign ministry said the released hostages were still in Nigeria and that the Dutch ambassador had been sent to the Delta region to meet them.