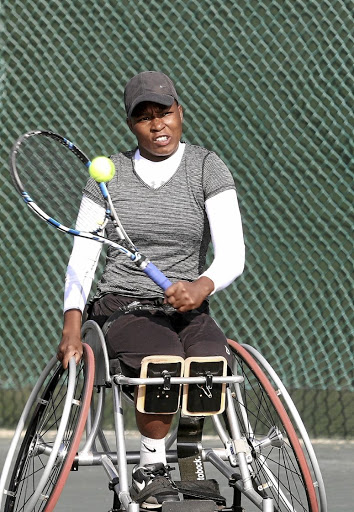 South Africa's number one wheelchair tennis player, Kgothatso Montjane, has earned praise and admiration for her fighting spirit at Wimbledon before her brave run ended in the semifinals last week.

Her biggest accolade however for playing in the best known tennis tournament is that she became the first black South African woman to do so.

Montjane, who had travelled alone to London and without a coach, gave her semifinals match her all before succumbing 6-1 7-5 to Dutchwoman Diede De Groot. Her historical run in the tournament was not in vain as it improved her world ranking from eighth to sixth.

Limpopo-born Montjane, who wanted to be a teacher like her mother when growing up, said her life took a different turn when the sport won her heart when she started playing professional wheelchair tennis at 20.

"Wheelchair Tennis South Africa has always been behind my career together with the South African Sports Confederation and Olympic Committee (Sascoc) but when I lost sponsorship from the federation, I got support from a non-profit organisation, Women Development Business Trust which made my trip to the Wimbledon a success," she said this week.

South African wheelchair tennis star Kgothatso Montjane has qualified for the US Open next month but does not know how she is going to get to ...
Sport
3 years ago

"The experience at Wimbledon was amazing," she said.

The best part of the tournament was making it to the semifinals first time out and meeting the royal family, she said.

She had arrived in London on a high after successfully defending her Swiss Open singles title.

Montjane, 32, who has a BSc in recreational and leisure studies from the University of Venda, has established a formidable presence on the international wheelchair tennis circuit.

Earlier this year, she reached the quarterfinals and doubles semifinals in the French Open.

Five fierce women who are owning 2018!

See four women who are slaying life and owning 2018.
S Mag
3 years ago
Next Article