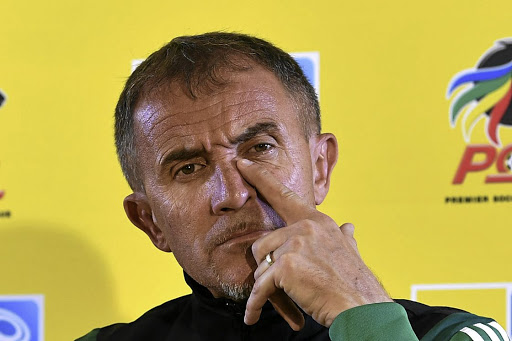 Two minutes Bucs ex-coach Milutin Sredojevic has been accused by a hotel cleaner of trying to force himself on her. / Lefty Shivambu

Money and status seem to be the tools that make most men think they are untouchable and that women will find them irresistible.

It's not a South African problem but a global one.

Big names such as musician R. Kelly and Hollywood producer Harvey Weinstein are facing fresh charges after many women accused them of sexual predation.

The latest case in SA involves ex-Orlando Pirates coach Milutin "Micho" Sredojevic, who apparently resigned after a hotel cleaner charged him with indecent exposure for allegedly trying to force himself on her.

In SA, the spectre of sexual abuse and violence has even engulfed presidents and other government officials who have been accused - although not found guilty.

The debate, as Women's Month comes to an end, rages on: Why do powerful, successful men consistently get caught with their pants down?

Is it their reliance on their power and authority that makes them believe they can get what they want - sex - without regard for the law?

A controversial theory by Dallas Lynn looks at how men and women (supposedly) evaluate each other. The premise of the ladder theory is that all men gauge women by asking "would I have sex with this woman or how likely is she to have sex with me"?

And women apparently have two ladders: the potential sexual partners and platonic partners - those they would never have sex with.

Clinical psychologist Anthony Nhlapo from Pretoria explains that theories such as the ladder theory were purely tied to gender inequality, poverty and patriarchy.

"The system forces a majority of women to be dependent on men for basic provision and, to some extent, luxurious lifestyle that come with prestige and comfort. We do know that powerful men tend to also own the means of production that caters for both basic needs and luxurious lifestyle.

"This is the reason why you will find that when women are given economic opportunities, some men become threatened as women become less dependent on men and are able to survive on their own," he says.

Nhlapo is equally dismissive of the notion that there was scientific alignment to men in positions of power having higher levels of testosterone.

"The available literature has not supported this long-standing assumption.

Elizabeth Dartnall, executive director of the Sexual Violence Research Initiative, says abuse by powerful men has nothing to do with sexual urges but is rather about having power and is a product of patriarchy.

Micho dribbled his way past the police

Agent said to have aided exit
News
2 years ago

"Patriarchy thrives in societies in which men have control over resources and power, a social system in which men are treated as superior to women. Men sexually harass women because they can.

"The social and political systems normalise violence against women.

"They know there will be little or no consequences for their actions. And men, especially the rich and powerful, get away with it because they are men, they are rich, they are powerful and they are famous," she says.

She also denies that women are attracted to such men or that women can portray the same abusive behaviour towards men.

Sex expert and author of Dr T: A Guide to Sexual Health & Pleasure, Dr Tlaleng Mofokeng, says when perpetrators are confronted, they become cowards and fail to be accountable for their actions.

A Johannesburg woman who has accused former Pirates coach Milutin "Micho" Sredojevic of sexual assault says she's so traumatised that she can neither ...
News
2 years ago

"They know that power is currency and certain positions give you social currency - whether you are the CEO or CFO of the department or the HR manager," she says.

"People use their social class or standing as currency and that, in itself, is a form of power. They know that the people whom they use that power on are less likely to firstly be heard or believed... and secondly, there will be less chances that there will be justice at the end.

"Which is why, when we [are] talking about the responses to gender-based violence or rape, everything we do culminates with the justice system actually giving out sentences and taking these crimes seriously through the complete cycle of the law."

Dr T emphasised that the blame could not be put on the victims of abuse or sexual violence.

About 87 women have accused Hollywood producer Harvey Weinstein. The claims range from requests for massages to intimidating sexual advances to rape. He has pleaded not guilty to charges of sexual assault and rape, and is scheduled to stand trial next month.