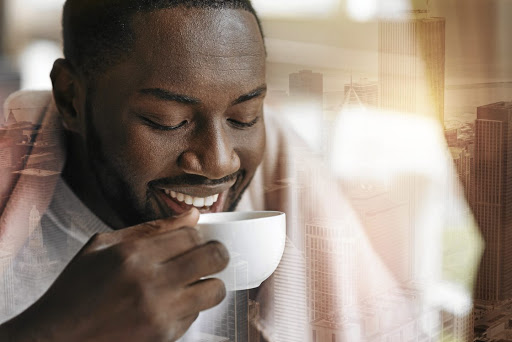 Enjoying a cuppa is a great way to start the day, alongside morning glory, the writer feels.
Image: 123RF

It is one of the most popular beverages in the world, second only to water. For nearly 5,000 years, people have been enjoying tea since it was discovered in China.

The health benefits of drinking tea are well-documented. The antioxidants in tea offer protection against generative diseases, strengthening the immune system and detoxifying blood.

Raised by my grandmother, I am an accomplished tea drinker. In scorching temperatures when the sun hung in the skies like a balloon from hell, she'd ask me to boil the kettle. I would fill my mug before serving Mme in the tree shade. For some reason, the temperature felt cooler after drinking tea.

The one person who nearly put me off drinking tea was a certain family friend who had the manners of a hog. The guy would sip his tea with his leaky lips that allowed the beverage to dribble down the side of the cup. Instead of using the saucer to prevent a spill, he scooped it with his tongue, all the way from the bottom to the top of the cup.

With no care for table manners and etiquette, this disgusting drinking habit would be repeated until his cup was empty. But that has not prevented me from enjoying a cuppa. It's a great way to start the day, alongside morning glory, of course.

I've also found tea a great companion during late nights when I need to work. As well as being a stimulant, tea is a diuretic, which means it makes you want to urinate.

Run darkie, self-driven cars may not see you

I prefer my tea black, just as Mme raised me, so I never acquired a taste for milk in my tea. Lately, though, I have dashed it with a few drops of lemon juice. And that's the joy of drinking tea, you can enjoy it with many infusions, such as mint, honey, turmeric and even vodka on a cold night.

What makes the daily ritual of drinking tea pleasurable is tuning my senses - taste buds and olfactory nerves - to hone in on the sweetness, bitterness, scent and flavour.

I have also found tea's hydrating properties useful, particularly after a night of heavy drinking.

I switched on the kettle this week for a round-up of the news of the day when a truly shocking item caught my eye. "Drinking tea causes cancer", screamed a headline.

My shock was exacerbated by the sheer number of foodstuffs that are blamed for cancers. Just last year, polony and braaied meat joined the list of cancer-causing foods. Surely the research about tea was wrong. After all, the World Health Organisation had absolved coffee from the cancerous list.

At this rate, I expect to read that breathing oxygen causes cancer of the nose hairs. I don't need research to tell me that getting out of bed increases my chances of dying. But I was pleasantly surprised that it was not tea that caused cancer, but drinking it piping hot that increases the odds of catching esophageal cancer. The esophagus is a long tube through which swallowed food travels to the stomach, so it figures that pouring any scalding liquids into your gullet every day would cause damage.

Henceforth, I will be taking my tea with cold milk.