Stealing from charity you're being given boggles the mind 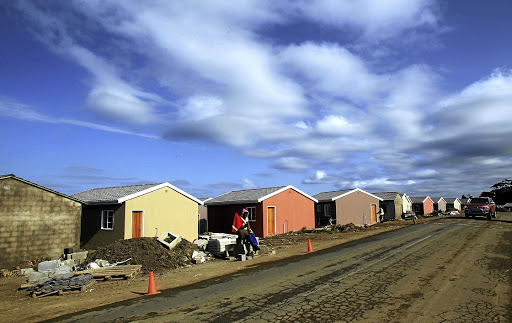 RDP housing has been associated with corruption, from the awarding of tenders to theft of building materials by those meant to benefit from the houses.
Image: Sibongile Ngalwa/ Daily Dispatch

The mind boggles. The lengths some people will go to pilfer baffles.

My younger brother has just been sub-contracted to build a dozen low-cost houses, or RDPs, as they are commonly referred to.

This was a big deal for him and he had to move mountains to raise the capital to buy the building material.

As a new player, the banks wouldn't advance him the credit and the hardware stores wanted the cash upfront. The main contractor would only pay upon the delivery of the 12 units.

After sleepless nights, calls and meetings, he finally managed to raise the capital and he hired the labour and purchased the building material.

The beneficiaries of the RDP houses were informed to make way for the construction and most chose to squeeze a shack at the back of the yard.

The building material was delivered at all the sites and the owners were informed when the building would start.

The following day, when my brother brought the builders at one of the sites, the material had developed legs. The bags of cement and pallets of bricks had gone with the wind.

The owner, who stayed with his family in a shanty on the property, said no one had heard or seen anything. Everyone seemed mystified. No dog had barked and the neighbours hadn't heard anything.

It was clear, however, that the goods couldn't have been moved on foot. The thieves must have had transport and they must have had the manpower to load it on board.

My brother told the owner to open a case with the police since the stolen material was actually his and the crime happened on his property.

This suggestion did not make sense to the owner and he seemed hesitant to report the crime but the constructor needed a case number to prove to his bosses that the material had indeed been delivered.

My brother got suspicious when the owner said he had no problem waiting for the "government" to deliver another batch of material to replace the stolen goods. After all, he said, he had been on the waiting list for more than a decade.

My brother wouldn't listen to this warped logic and insisted the police be called. He called a business associate and explained the conundrum.

Chester, an old hand in the low-cost housing game, smelled a rat. The material, he suspected, could still be on site.

The next step was to call the owner's bluff. When he heard that the police were on the way with a forensic team and sniffer dogs, the owner pulled my brother aside and confided that the material was in fact stashed inside the shack.

He had moved the whole lot and packed it inside the shack during the night. It was supposed to be a perfect crime as he was certain the "government" would replace it.

Needless to say, my brother did not call the police. At the time of writing, the RDP house has been built and delivered. The mind truly boggles.