Silly season back as ANC tries to hoodwink voters - again 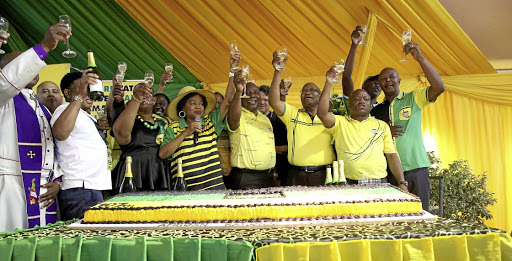 The writer says in 1994 the ANC promised a better life for all but mushrooming squatter camps and rising unemployment bear testimony to the lie.
Image: Thuli DlaminI

The silly season is over but another is lurking on the horizon. In fact, the second silly season kick-started earlier in the week when the ANC hosted its birthday celebrations in Durban.

The occasion also saw the launch of its manifesto yesterday to woo voters ahead of the national elections. The well-resourced governing party typically spared no expense.

Throughout the week, ANC politicians unashamedly knocked on the doors of the poor to distribute T-shirts and make promises that would never be kept. The 107-year-old movement is experienced at this sort of thing.

In the first democratic elections in 1994, the ANC promised a better life for all. However, mushrooming squatter camps and rising unemployment bear testimony to the lie.

The party also unveiled the statues of four of its presidents, which bore no resemblance to Thabo Mbeki and Jacob Zuma. A whopping R20m was spent on this abortion while ordinary people struggle to make ends meet.

Despite its chequered record in government, polls have shown that the ANC is streets ahead of any opposition party and tipped to return to power after the elections. This is despite the Independent Electoral Commission (IEC) revealing there are 563 political parties registered for the 2019 elections. We ought to be spoiled for choice but a cursory look at this motley crew does not inspire confidence. Most of them are mickey mouse parties that lack a national footprint.

For instance, how many people are likely to vote for the Gazankulu Liberation Congress? The name Gazankulu alone raises red flags since it was used by the apartheid government to classify the then homeland.

This party will need the nous of the Matatiele-based African Independent Congress (AIC) to garner enough votes to get a parliamentary seat. The AIC notoriously used a logo that looks similar to the ANC in a smash-and-grab that netted three seats in parliament.

Cyril Ramaphosa has admitted the governing party has made mistakes in the past and pleaded with the country to give the ANC a chance.
News
3 years ago

The voters also have to contend with Patricia de Lille's recently formed Good Party after her ouster as Cape Town mayor by the DA.

Last month, the "intellekshual leksha", Hlaudi Motsoeneng, fired a salvo at President Cyril Ramaphosa with the founding of his African Content Movement, insisting he can't be defeated by the Buffalo.

The disgraced former SABC executive may sound delusional but he has never been short of confidence.

Not to be outdone, Gupta chief defender Mzwanele Manyi announced this week that he was leaving the ANC to join the African Transformation Movement (ATM).

The acronym has invited public ridicule, but for someone who has weathered state capture derision, it is water off a duck's back.

Former ANC MP Dr Makhosi Khoza had the foresight to ditch her ADeC before contesting any election while Dr Mamphela Ramphele left her Agang with a trail of debt totalling millions.

It is a testament to our democracy that anyone with political ambition and hunger for a parliamentary salary can start their political party.

The National Drinking Committee of Straight & Two Beers recently emerged from a weekend summit where we shot down the formation of a political party for those who love the bottle.

The parliamentary brawls have been embarrassing even to our bar-hopping members.