In loxion kulcha car is mightier than house 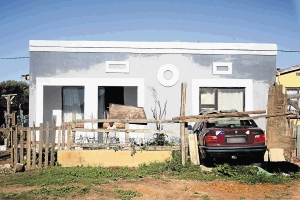 A BMW is a panty-dropper while a bonded house is unlikely to get you laid on a Saturday night, says the writer.
Image: Fredlin Adriaan

I had just run my bath on Tuesday evening when, poof, Eishkom pulled the plug. My body was immersed in water when the whole neighbourhood was plunged in darkness.

Instead of going in search of a candle, I did what normal people would do in my circumstance: I took out my phone and reported the power outage to social media.

I sat in the warm water and tried to make out my middle finger and could not see it. It was going to be impossible to continue with the bath when I could not see my body. I was three months old when soap bubbles entered my eye when Mme washed me and I still haven't recovered from the trauma.

Friends suggested I only soap the body parts I was familiar with and therein lay the nub. Whereas I have explored many anatomies in my life, I have neglected my own. My body is like my name; it's for others to use.

I can't be a hit when I hit the dance floor

First warning to stop embarrassing myself came when I was still at school.
Lifestyle
3 years ago

For instance, I know more about the contours of Beyonce's curvature and Boity Thulo's derriere than I do about the many scratches on my torso and legs. I can write a thesis on Zodwa waBantu's groin but have never explored my inner thigh.

So, I sat in the bath and called Eskom executives unprintable names. Ironically, it was on the same day it was announced that SA was out of the recession. Considering that electricity supply is critical to economic activity, I found it unbelievable that our economy was out of the pit toilet. There's no way industry and the economy can grow on generators and illuminated paraffin. But as Laurence J. Peter once said; "an economist is an expert who will know tomorrow why the things he predicted yesterday didn't happen today."

Load shedding also meant I missed the broadcast of the conversation with one of the richest South Africans, Johann Rupert, on the same evening.

I had wanted to hear what makhulu mlungu had to say about wealth creation so I could emulate him.

I heard later that he rubbed a lot of my people the wrong way when he accused them of wasting their dosh at Taboo nightclub and buying BMWs instead of creating real wealth.

I was surprised that my people were angry since that's common knowledge and practice.

Many a cherished childhood memory made by her side.
Lifestyle
3 years ago

The so-called Black Diamonds heated the economy with their conspicuous consumption before landing in eternal debt with the banks.

It is a familiar sight to see a gusheshe parked near a mkhukhu for the night because in some quarters, a car is mightier than a house. A BMW is a panty-dropper while a bonded house is unlikely to get you laid on a Saturday night. It's simple kasinomics, which Rupert knows nothing about because he never grew up ekasi. A house is impossible to drag to the car wash on weekends while a beemer or vrrphaa guarantees monate mpolaye!

Lots of chaps would rather take their date to their friends' apartment or drive to their mom's, wake up their laaitie and proceed to sleep on the sponge. It defies logic, but it is what loxion kulcha is.