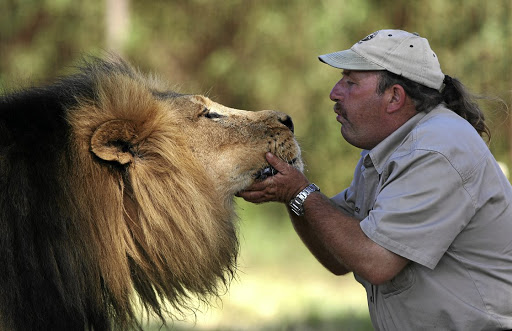 Mankind have been encroaching on the lions' territory for years, reducing their sanctuary in the name of development.
Image: James Oatway

They are called the kings of the jungle for a reason. As majestic as they are in appearance, lions are extremely dangerous animals.

In the jungle, as in the "real world", you either fight and dominate or hide and evaporate. Lions have been roaming the land for centuries doing what lions do - raising their young and preying on the less fortunate antelope or buck.

However, mankind has been encroaching on the lions' territory for years, reducing their sanctuary in the name of development.

In Kenya, the pastoral Maasai have been killing lions at an alarming rate in order to protect their cattle.

In Iraq, the lions were left to fend for themselves in a zoo following the fall of Saddam Hussein. How a lion is supposed to hunt in an enclosure is anybody's guess.

As they began dying of hunger and disease, conservationists mercifully managed to rescue some animals to South Africa.

The rhinoceros may be famous for being killed for its horn, but the lion is similarly killed for its bones, claws or merely to keep its head as a trophy.

Human beings have abused their status as the most intelligent animal to destroy other species instead of sharing the land with them.

It's been a bloody time for the South African canned lion industry.
News
4 years ago

In worst cases, wild animals would be kept and taught tricks to entertain human beings in a circus.

This week a harrowing video emerged of Mike Hodge, a British wildlife park owner in Thabazimbi, Limpopo, when he languidly entered the lion's den.

One of the beasts he reportedly bottle-fed since birth sees him and gives chase. The 72-year old madala tries to be Usain Bolt but is no competition to Shamba, who quickly pounces on him and dragged him back into the enclosure.

A tourist is heard screaming: "Somebody help, please! Oh my God!"

As Hodge lies wounded, shots are heard and Shamba pays the price with his life while Hodge is taken to hospital where he is recovering. Following the tragedy, Black Twitter was unforgiving. "Comrade Shamba is a martyr who died asserting his African sovereignty. He started a spark that must give life to a decolonial fire," was but one of the comments I read.

In only a minute-and-a half, Hodge and Shamba became the symbols of the colonisation of Africa by Europeans. Shamba represented the one-upmanship of the oppressed while Hodge epitomised the fate that awaits the supremacist attitude of the conqueror. It would be sad if it was not tragic.

Three years ago, Game of Thrones editor was mauled by a lioness through her car window when she stopped to take a photograph at Lion Park in Gauteng. This was despite all the signs that warned tourists to keep their windows closed at all times.

The one question Hodge needs to answer is: Yena a ya kwini?

Raising Shamba on Weet-Bix and milk clearly did not diminish her instinct.

Captive lions like Shamba have lost their fear of people‚ making them dangerous to interact with.
News
4 years ago
Next Article